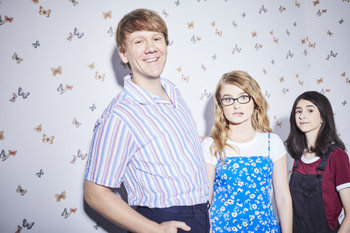 Everything's Gonna Be Okay is a comedy series created by and starring Josh Thomas (of Please Like Me fame). It aired for two seasons on Freeform from 2020-2021.
Advertisement:

When his father announces that he's terminally ill, Nicholas Moss finds himself caring for his two half-sisters, autistic Matilda and temperamental Genevieve. Hilarity Ensues as Nicholas finds he has to grow up quickly.