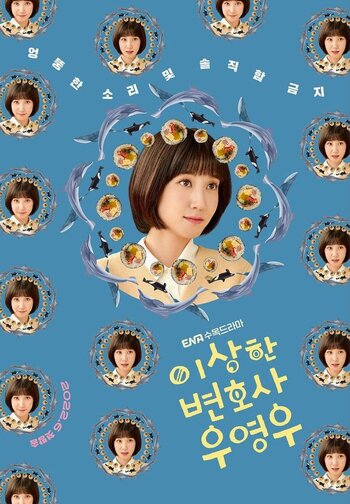 Stay on topic and don't be blunt
Advertisement:

Extraordinary Attorney Woo is a Korean legal dramedy that debuted in 2022. It airs on ENA in Korea with episodes simultaneously released on Netflix for international audiences.

Woo Young-woo is Korea's first autistic lawyer. Newly hired by Hanbada, one of the country's most-prestigious law firms, Young-woo represents her clients with gusto while slowly learning that justice is not quite as straightforward as the law. As she does so, Woo Gwang-ho, her single father, frets over her, worried about how his daughter will fare as she becomes more independent.

At Hanbada, Young-woo comes under the tutelage of Jung Myung-seok, a senior attorney who patiently molds her into a litigator who can benefit the firm. She also comes into close contact with Lee Jun-ho, a member of the firm's support staff and all-around nice guy, who stirs strong emotions within her.

The series became an immediate global success and has been renewed for a second season, due to be released in 2024. There is also a 60-issue comic-book adaptation of the first season, an upcoming musical adaptation, and a US adaptation in the works.