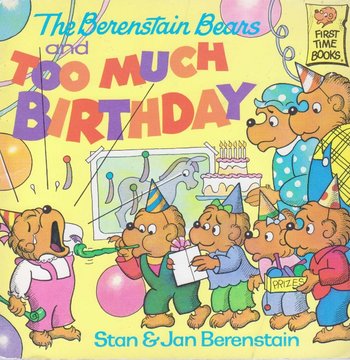 Caterer: I'm sorry, but there's, um, been a problem, uh...
Peggy: Spit it out!
Caterer: The refrigeration went out and the chicken and prime rib were spoiled, and your ice cream birthday cake melted.
Dale: [yelling] And there's no food! [everyone groans]
Peggy: Happy freakin' birthday to me.
— King of the Hill, "Strangeness on a Train"
Advertisement:

The birthday party is usually fun for all the guests, and it's supposed to be a great day especially for the birthday person. They are supposed to be the center of everyone's attention, to receive most sincere birthday wishes for the next year of their life, get nice presents and a huge cake. However, not always. In this case, the cake ends up burnt, the candles melted and all the presents are clothes. Whatever went wrong, a day that's supposed to be sweet has turned sour.

In fiction, especially if the celebrating character is a Butt-Monkey, their birthday party will go wrong in every direction. It should have been their day, but they end up Crying at Your Birthday Party, dissatisfied or disillusioned, or apathetic if this happens all the time. It may result in them becoming the Birthday Hater who doesn't want a birthday party ever again. Some characters might take it on the chin and at least pretend they don't care.

This trope sometimes ends with Throw the Dog a Bone. Especially if the birthday person's lucky enough to have a loving and caring family or loyal friends, they'll try their best to cheer them up or make it up to them somehow.

A Birthday, Not a Break is a trope when something terrible or downright tragic happens on a character's birthday, and it's unrelated to the celebration. Ironic Birthday is a sister trope, which is when the person who should be celebrating their birthday experiences something nasty, but they have to pretend they're fine for their guests' sake.

This trope is about ruined parties and the disappointed birthday person. See also a Shoddy Shindig for boring parties and Nasty Party for murderous ones. One-Person Birthday Party is a very lonely subtrope. Not-So-Forgotten Birthday is a variant when it all ends happily after all. Surprise Party may be a reason why it goes badly because it's harder to coordinate everything. This can also occur during a Shock Party or Scary Surprise Party... or even a Birthday Suit Surprise Party. Dreaded Kids' Party Entertainer Job is when the party goes wrong for the entertainer. See also Worst Wedding Ever, which is the wedding equivalent of this trope.