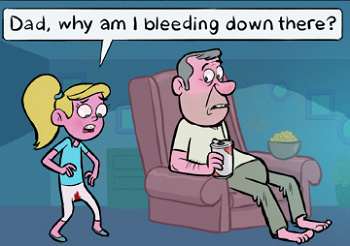 Blood appearing on your clothing is worrying. Blood continuously appearing without any visible wound is very worrying. Wait, what's that? It's normal?

Not everyone gets The Talk in time. Menstruation is varyingly a footnote to a chapter of its own depending on the assigned gender of the child. Sometimes, because they're Raised as the Opposite Gender, they are never told about it to maintain the deception. If they're Raised by Dudes, the parent or guardian might be putting off "the talk" for his own comfort until it's too late. Otherwise, it may be that the guardian is overly neglectful or prudish about the whole business. Or it can simply mean that mom or dad or parental substitute wasn't expecting to need to give the talk that soon, and they get caught out by menarche coming at a younger age.

A somewhat tamed variant happens when the girl knows what is happening, but she's extremely surprised, extremely worried, or extremely uncomfortable by its messiness. Or the cramps might be really bad. Or the timing might be really inconvenient — she might be out of home (a school trip, an after-school activity, some out-of-town fancy occasion, a summer camp, etc.) or in bed and it's really bad when she can't ask her mom for the hygienic supplies. It might happen that her mom is away or out of the picture, and she doesn't have anyone to ask for pads or tampons. Going shopping for these at that fragile age is usually considered quite embarrassing (and even moreso if it's in the form of a Tampon Run).

Menstruation is often seen as a symbol of adulthood and for girls, it's usually part of a Coming-of-Age Story. And if unprepared for this very real proof of puberty, it can signify how wrong the child's upbringing has gone. It may be related to Miss Conception if the girl is utterly clueless about its meaning.

Lots of works of fiction are strictly No Periods, Period and women menstruating will never be mentioned. Generally speaking, there are two major exceptions: Menstruation signifies a young girl's transition into womanhood (which is this trope) or missing a period and being late is used as a sign that a woman might be pregnant (see Pregnancy Scare).

Compare All Periods Are PMS. See Menstrual Menace for when a first period triggers supernatural powers.

Has nothing to do with the first period of school nor punctuation.

A young girl believes she is dying the first time she experiences her period, until she gets a lesson in life from Aunt Flo!

A young girl believes she is dying the first time she experiences her period, until she gets a lesson in life from Aunt Flo!