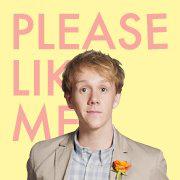 Please Like Me is an Australian television comedy-drama series airing on The ABC starring comedian Josh Thomas. The series revolves around Josh, a university student and his coming to terms with his sexuality, and the seemingly impossible search for love.
Advertisement:

The first season began airing in Australia on ABC2 on 28 February 2013.

In July 2013, it was announced that the series would air in the United States as part of the launch programming of Pivot, a new digital cable and satellite television channel. On that same month they announced they had picked up the show for a second season. Season 2 premiered in the US on the 9th of August and on the 12th in Australia.

In July 2014, Pivot announced they had picked up the show for a third season.

In July 2016, it was announced that the show had been picked up for a fourth season.

In January 2017, Josh Thomas announced on his twitter that season 4 was the last.