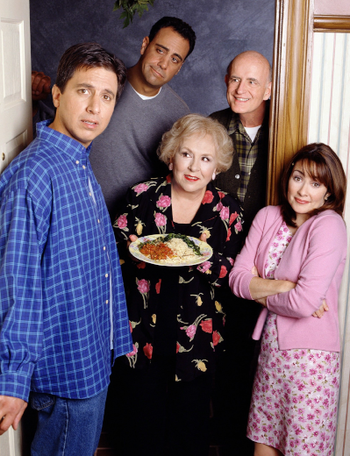 From left to right: Ray (whom everybody loves), Robert, Marie, Frank, Debra
Ray: So as I was saying, Homer, Mondays 9:00 CBS. They say everybody loves that guy but I don't get it.
Homer: What are you talking about?!
Ray: I'm just saying, catch it while you still can.
— The Simpsons, "Don't Fear the Roofer"
Advertisement:

Everybody Loves Raymond is a CBS Dom Com about Ray Barone, a sportswriter for Newsday, desperately attempting to keep the peace in his dysfunctional family. He's a fairly typical TV husband, loving the simple things (sports, TV, lying around), but he's pretty lazy, and occasionally delves into man-child status. He's married to a harried, crabby stay-at-home wife. His brother is usually jealous of his status as the favorite child, and openly whines about it. His obnoxious parents live across the street and provide him and his wife no end of headaches by intruding upon their daily lives.

Notable is the fact that despite the main couple having children, the kids don't make up part of the core cast of the show, most often appearing as background or as the basis for some conflict amongst the adults. In fact, this was an early part of the show's beloved nature among critics during its first few seasons (which mostly went unrecognized by the ratings), even mentioned in the opening credits of the first season ("it's not really about the kids"). This was in stark contrast to other sitcoms airing during The '90s such as Full House, Home Improvement, The Nanny, or Family Matters, where the kids had been at the front and center of almost all the plots.

Also unusual in that the show, in all of its 9 seasons, never suffered an obligatory Jumping the Shark moment, ending with the same characters and concepts it began with, aside from adding Amy to the core cast (though she came on as a bit character in the first season and stayed off-and-on from there). It also ended very much near its ratings prime, as well as never falling too far in the critics' eyes.

Not to be confused with Everybody Hates Chris, whose title is a derisive shot at Everybody Loves Raymond.

Everybody Loves Raymond contains examples of: