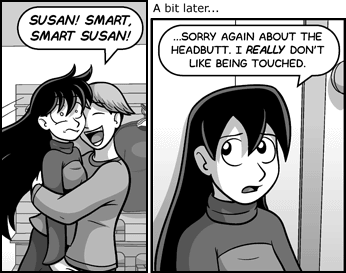 "Don't touch me. Don't ever touch me."
— Guts, Berserk
Advertisement:

This is a character who just doesn't like being touched, whether it's by a stranger or someone they know. In fact, it's their Berserk Button. They may be this way as a result of a bad experience, simple shyness, or because they just don't have the tolerance/patience for such things. Sometimes there's something wrong with them in a dangerous way and they know it. There's a good chance that they may be something of a loner as well. Sometimes they change for the better later on, sometimes they don't, and sometimes the fact that they don't like to be touched isn't treated as a problem in the first place.

If it's treated like a problem, expect their Love Interest to attempt to fix it at some point. Most of the time, they succeed but the number of blunders and the time it takes depends greatly on the genre and nature of the story. At other times, they may already have a special person whose touch doesn't trigger any adverse reaction, indicating a particularly trusting relationship.

In Real Life, this is called tactile defensiveness

and is common in abuse victims and people with conditions like ADHD or autism spectrum disorders, and especially with OCD or if the person is Terrified of Germs, but even then, some people just don't like it and can't explain why. The perception that someone hates being touched can also be a result of a Culture Clash: if someone believes that touching is an intimate gesture to be shared among close friends and lovers, then the American custom of shaking hands with someone the first time you meet them would be overly intimate, akin to walking up to a complete stranger, grabbing their face, and Frenching them. Depending on culture and personality, attempting to touch the person could result in a Handshake Refusal, the person stepping back to regain some sense of personal space, or an attack on the Personal Space Invader; however, adequately befriending them usually removes the touch taboo in this case.

May even be a result of It's Not You, It's My Enemies, because the character wants to keep others at arm's length for fear of getting them hurt by their enemies to get to them.

If someone like this actually lets someone else touch them, you can rest assured that something serious has just happened. Or the person they allow to touch them may be the only exception whether in a romantic sense or otherwise.

For instant hilarity, pair them up with someone who has No Sense of Personal Space or is a Cuddle Bug. However, if you don't want them to punch you in the face, Air Hugging may be a better choice. May sometimes be a trait that Tsundere share. Compare and contrast the Affection-Hating Kid, who does hate hugs, but touching isn't the issue— the sentiment is.

Loona the Hellhound is Blitzo's adopted teen daughter, and certainly acts the part.

Alternative Title(s): Dont Touch Me, Doesnt Like Being Touched

Loona the Hellhound is Blitzo's adopted teen daughter, and certainly acts the part.