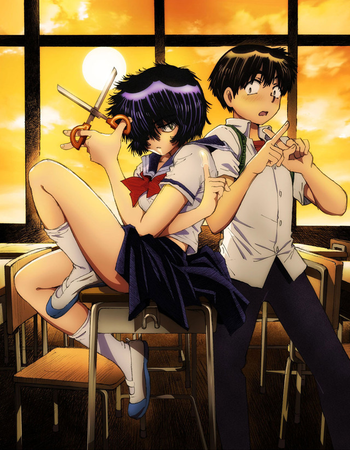 Mysterious Girlfriend X (謎の彼女X, Nazo no Kanojo X) is a romance comedy manga by Riichi Ueshiba, describing the budding romantic relationship between Mikoto Urabe, an unusual girl with some awesome scissors, and Akira Tsubaki, the guy who's addicted to her drool. Seriously.
Advertisement:

Due to their special connection, Urabe and Tsubaki have the ability to share their emotions and physical conditions through saliva - which Tsubaki is addicted to, and must taste some frequently to avoid going into withdrawal again. And that's just the start of the weirdness. The manga follows the two as they progress in their relationship.

The manga ran in the seinen magazine Monthly Afternoon from 2006 to 2014. An anime adaptation

aired from April to June 2012 as part of the Spring 2012 Anime season. It can be watched subbed in English on Crunchyroll and is currently licensed for release by Sentai Filmworks. An OVA was released along with the 9th volume of the manga in August 2012. It has also been dubbed in English