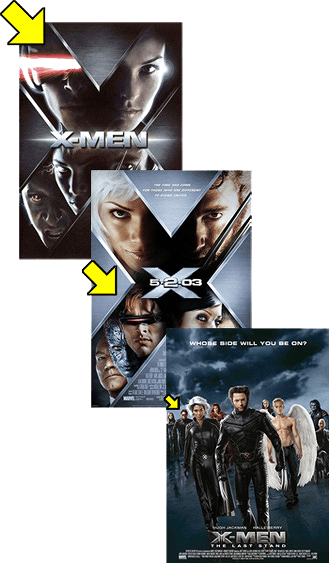 Over the course of three films, Cyclops moves to the back (while Wolverine moves to the front).
"Remember when we used to do stuff? You know, be out there with them and help?"
— Bulma, Dragon Ball Z Abridgednote Ironically, she plays a more important role in the next arc.
Advertisement:

We have a member of the supporting cast. They are important to the plot. Sure, they fall Out of Focus at times, but they're still pretty relevant to the proceedings for the most part. But then comes the sequel, an adaptation or The Movie, and... hey, where'd they go? They weren't completely written out, but didn't keep what importance they had in the original. The character's fanbase will complain, while everyone else may just accept it as the new status quo.

Opposite of the Ascended Extra; instead of a background or one-off character becoming a key member of the supporting cast, a key member of the supporting cast becomes a background or one-off character. Also contrast Spotlight-Stealing Squad, which can also cause this to happen; that said, there may not be anyone in particular that takes these characters' screentime, and the presence of a Spotlight Stealing Squad doesn't mean no one else is plot-important anymore. In works where Anyone Can Die, supporting characters fated to die may end up demoted to extra before their deaths.

Super-Trope to Demoted to Comic Relief and Demoted to Satellite Love Interest. Compare Shoo Out the Clowns, Sir Not-Appearing-in-This-Trailer, Not as You Know Them, The Artifact, Out of Focus, What Happened to the Mouse?, Chuck Cunningham Syndrome, and Commuting on a Bus. Contrast Ascended Extra, Breakout Character, and Ensemble Dark Horse.