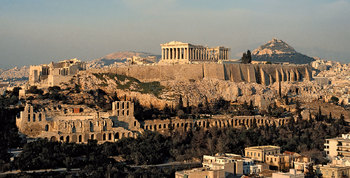 Modern Athens with Acropolis in the centre
"In short, I say that as a city we are the school of Hellas; while I doubt if the world can produce a man, who where he has only himself to depend upon, is equal to so many emergencies, and graced by so happy a versatility as the Athenian."
— Pericles, Funeral Oration
Advertisement:

It is the capital of Greece and its largest city, with a population of 4 million residents. It dominates the Attica region and is one of the world's oldest cities, with its recorded history spanning over 3,400 years. The basin is bounded by four large mountains: Mount Aigaleo to the west, Mount Parnitha to the north, Mount Pentelicus to the northeast and Mount Hymettus to the east.

It has a large financial sector, and its port Piraeus is both the largest passenger port in Europe and the second largest in the world. The Municipality of Athens (also City of Athens), which actually constitutes a small administrative unit of the entire city, had a population of 664,046 (in 2011) within its official limits, and a land area of 38.96 km2 (15.04 sq mi). The Athens Urban Area (Greater Athens and Greater Piraeus) extends beyond its administrative municipal city limits, with a population of 3,090,508 (in 2011) over an area of 412 km2 (159 sq mi).[15] According to Eurostat in 2011, the functional urban area (FUA) of Athens was the 9th most populous FUA in the European Union (the 6th most populous capital city of the EU), with a population of 3.8 million people. Athens is also the southernmost capital on the European mainland and the warmest major city in Europe.

In ancient times, it was a powerful city-state and a "Center of Arts and Philosophy", a title it hold even in the Roman times. Nowadays, while it may pale compared to much larger and more economically powerful capitals, like London or Paris, for the Greeks it's an important city and a significantly commercial and cultural place.

Athens is a world centre of archaeological research. Except from the Acropolis and the Parthenon, it also features: 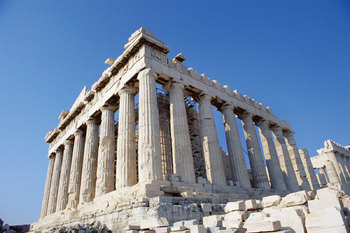 They say of the Acropolis where the Parthenon is… note  that there's no straight line.

"Earth proudly wears the Parthenon as the best gem upon her zone."
— Ralph Waldo Emerson

You know it, you love it, you cry at its current state.

One of the wonders of the ancient world and a brilliant piece of architecture, designed by Iktinos and Kallikrates. It's regarded as an enduring symbol of Ancient Greece, Athenian democracy and Western civilization and one of the world's greatest cultural monuments. To the Athenians who built it, the Parthenon and other Periclean monuments of the Acropolis were seen fundamentally as a celebration of Hellenic victory over the Persian invaders and as a thanksgiving to the gods for that victory.

It derives from the Greek word παρθενών (parthenon), which referred to the "unmarried women's apartments".

Due to being such an old city (and the oldest capital of Europe), it has a long and complicated history. So, we will start with what most people know about it. It installed the world's first democracy in 508/507 BC., after its citizens overthrew two tyrants, Hippias and Hipparchus. The father of the Athenian democracy is Cleisthenis.

It played a huge role in the Greco-Persian Wars, which started in 499 BC., when Athens helped its colonies in Asia Minor rebel against The Achaemenid Empire. The rebellion failed, although the Athenians did manage to burn down Sardis.

The Great King, Darius I, furious for this, wanted to punish Athens and Eretria, so he started an Invasion in 492 BC. The Invasion ended in 490 BC., when the Athenians faced the Persian Army at the Battle of Marathon and received a major victory. This victory secured Greece's safety for another ten years.

During the second invasion (480 BC.), Athens was burned to the ground, but was rebuilt after the Persians left. From 478 BC. to 431 BC., Athens became one of the two most powerful city-states in Ancient Greece (alongside Sparta) and, with Pericles' contribution, enjoyed a period of cultural growth and influence throughout the greek world, which came to be known as "The Golden Age of Pericles".

But things changed when The Peloponnesian War started, which lasted for 27 years. Long story short, Athens lost and was forced to install an oligarchic system, also known as "The Thirty tyrants", though it retrieved democracy after a harsh period of fear and execution.

Despite these shortcomings, it still remained a big city and a "Centre of Arts and Philosophy", though it had lost its military and political influence. Just like the rest of the greek city-states, it was eventually conquered by the Macedons and replaced its democracy with plutocracy (and that's how the world's first democracy ended, folks).

It still remained a rich city (though, it had lost its autonomy), until the Romans arrived and, just like every other greek city-state, it turned into a tourist attraction. While it lost its power in the Byzantine period, it regained it in the 9th century AC.… only to lose it again when Constantinople (and the rest of the greek world) fell to the Ottomans.

After Greece earned its independence in 1830, Athens was merely a small town full of ancient and Byzantine ruins, while Nafplio hold the title of "the Capital of Greece". It was anything like its former glory. All this changed when King Otto of Bavaria (a huge ancient Greece nerd who had studied Classical Literature) decided that Athens should be instead, for its glorious past and for being the "Cradle of Hellenic Civilization".

Once he removed the title of "Royal Seat and Capital", constructions started immediately.

In the years to come, Athens became the pole of attraction for Greeks, who arrived from all parts of the country. It had expanded and now was a city of 140,000 residents with great buildings and important archeological sites, and the commercial and cultural intellectual center of the country. It hold the "Modern Olympic Games" twice (first, in 1896 and later, in 2004) and it's now a metropolis.

Due to being the capital of Greece, Athens appears in a lot of works of Greek fiction. Here are some examples:

Defined as people born and raised in areas now part of the modern metropolitan area, or who worked there for significant periods.