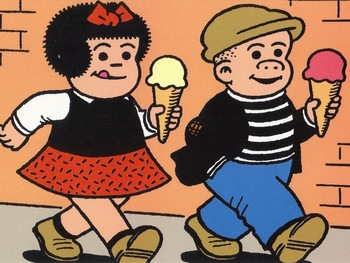 The character first appeared in 1933 in Fritzi Ritz, a strip that had been created in 1922 by Larry Whittington (Bushmiller took over in 1925). Nancy proved to be so popular as a character that, in 1938, the strip was retitled to her name.

Bushmiller continued to draw the strip until his death in 1982. It was subsequently taken over by Al Plastino (on the Sunday strips) and Mark Lasky (on the dailies), only for Lasky to pass away just a year later at age 29. Jerry Scott, later known for Baby Blues and Zits, took over the strip in 1984, drawing the characters in a much more broad, cartoony style. Scott also modernized the world of Nancy. Scott's run lasted until 1995, when he was replaced by the sibling team of Guy and Brad Gilchrist, who created a hybrid art style that was part Bushmiller and part superhero comic. After a few years, Guy Gilchrist became the sole artist, continuing until early 2018. The strip is now drawn by Olivia Jaimes, making her the first woman to draw the strip. Jaimes returned to a style more reminiscent of Bushmiller's work (including re-inserting his famous fourth wall breaks) and further modernized the comic.

The comic was also the subject of an in-depth analysis book How to Read Nancy, which breaks down the elements of Bushmiller's comics—and comics in general—in exhaustive detail.