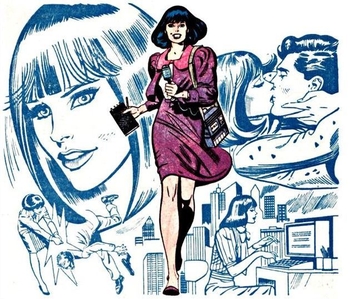 , looks for love in lofty latitudes, and laughs at liability.

"It's my business, looking beyond the external."
— Lois & Clark, "Pilot"

Lois is a career-driven, Intrepid Reporter who speaks her mind and goes for the big scoop regardless of the dangers. Her creator Jerry Siegel said he based Lois on the film character Torchy Blane, Girl Reporternote played by Glenda Farrell, her first appearance was in the 1937 film Smart Blonde

. Her first series, during The Golden Age of Comic Books in the 1940s, was Lois Lane, Girl Reporter, which appeared in the Superman comic book and had her defeating bad guys and getting front page stories on her own.

Lois once again seemingly got her own comic series, Superwoman, as part of 2016's DC Rebirth, in which the post-Flashpoint Lois gained Superman's powers, becoming a superhero and protecting Metropolis. However, she died in the first issue leaving Lana Lang, who also gained powers, to take on the mantle of Superwoman. The pre-Flashpoint version, instead, lived with her husband Clark and her son, Jonathan Samuel Kent, who was born in the Convergence event, appeared with his parents in Superman: Lois and Clark and eventually became Superboy.

In Bendis' Superman and Action Comics run, she decided to live far away from Clark in her own apparment following the trauma of travelling through space with a mentally-unstable Jor-El (Clark's father and her father-in-law) and being the wife of freaking Superman — a icon of hope and justice not only on Earth but on a large part of the galaxy — with her returning to independent/freelance journalism.

Outside of comics, Lois has appeared in multiple Superman adaptations in different media, including:

Lois Lane is captured and tied up by a mad scientist.

Example of:
Bound and Gagged

Lois Lane is captured and tied up by a mad scientist.