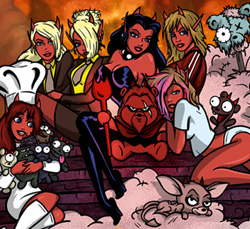 is a Webcomic created by Ben Bourbon that has been online since July of 2009. All of the pages are hand-drawn and a new page is posted weekly each Monday.

The Devilbear is a plush bear named Bearalzebub who rules teddy bear hell and is assisted by a group of devil girls called Daivas (because plush bears are limited by having "mitten hands"). The Daivas each have a job named for one of the Seven Deadly Sins, such as "Daiva of Gluttony" but generally do not demonstrate the sin so much in themselves, but instead they do things that encourage others to partake in it. For example, the Daiva of Lust is very curvy and oozes innuendo but she does not lust for anyone herself and the Daiva of Gluttony is not a glutton herself but she is an awesome cook. The Daiva of Sloth, however, wears only one sock; she is either too lazy to remove it, or too lazy to put the other one on, and the Daiva of Wrath is currently trying to kill everyone.

Most of the plush bears that end up in teddy bear hell are parodies of famous plush bears or celebrities personified as plush bears and die violent deaths that spill their stuffings about.