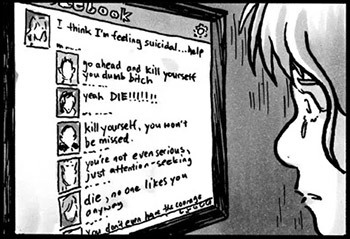 YOU SHOULD KILL YOURSELF... NOW!
"Planning suicide? Then get to it."
— Kimura's boss to Suzuki, Tekkonkinkreet
Advertisement:

Telling someone to kill themself. If done as a joke, this is usually played for Dark Comedy or Comedic Sociopathy, although some stories take the time to explore the serious effects it may have on the targets. If called out on this, expect a "Just Joking" Justification.

If the character is seriously trying to convince another character to kill themselves, this may be Murder by Suicide.

Leave Behind a Pistol is similar, but done with different intent. Compare Go, Ye Heroes, Go and Die, which does this by accident (normally). See also Why Won't You Die?, which usually involves frustration that the listener wasn't killed by someone else, and Ordered to Die, where the commander expects to be obeyed. Contrast Talking Down the Suicidal. Compare and contrast Suicide for Others' Happiness, when a character believes other people would be better off with them out of the picture.

Truth in Television, and often goes hand-in-hand with Kids Are Cruel, Teens Are Monsters, Cyberbullying, and Internet Jerk. In many jurisdictions, deliberately inciting someone into suicide is an extremely serious crime that carries penalties similar to manslaughter or even premeditated homicide. However, real life examples are not needed for this page.

Stan calls the Dean who scammed his grandpa into buying an overprice worthlessly jewel, and tells him to kill himself

Stan calls the Dean who scammed his grandpa into buying an overprice worthlessly jewel, and tells him to kill himself