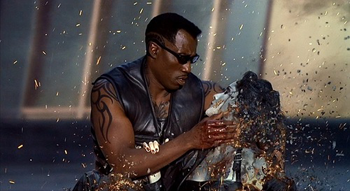 "I want to die while I'm still a vampire...I want to see the sun."
The First: You don't have the strength to kill yourself.
Angel: I don't need the strength. I just need the sun to rise.
— Buffy the Vampire Slayer, "Amends"
Advertisement:

Vampires who want to kill themselves tend to do it by waiting for the dawn or walking into sunlight.

There are a lot of reasons for a vampire to get fed up with their undead condition: Who Wants to Live Forever?, What Have I Become?, Horror Hunger, and Warm Bloodbags Are Everywhere just to name a few. However, should they choose to kill themselves and end their undeath, they won't have it easy; being a vampire means they're immune to most methods of suicide except for those that involve extreme force. Sure, Our Vampires Are Different means they vary in toughness and weaknesses, but they're immune to things like poisons, exsanguination just sends them into a feeding frenzy, and hanging or drowning do nothing (no breathing). Even stepping into traffic may not do the job, leaving them a painful heap of broken but still unliving bones. This leaves only things like decapitation, which is impractical since not everyone has a personal guillotine, and self-immolation, which is easy to chicken out of.

For these reasons, suicide by sunlight is the preferred method for a lot of vampires. They'll avoid the hassle by simply going out during twilight and waiting for the dawn, or even just stepping out into direct sunlight mid-day. From a storytelling perspective and for an added and romantic bonus, it's hard to top this method for sheer pathos. There will be a quiet scene as the vampire waits nervously yet resolutely for the dawn, only to break out into screams and flames as the dawn's rays hit. In very rare cases the vampire achieves a level of inner peace beforehand that allows them to ignore the pain and die in peace (and if they're really lucky, the sun kills them so fast they just go *poof*). For extra extra pathos, a loved one of theirs will try to get them to find shelter, only to have them soon mourning over a small pile of ashes that scatters in the wind.

Naturally, this trope only applies in settings where Our Vampires Are Different and has sunlight as a deadly weakness.

Contrast Kryptonite-Proof Suit. See also Undeath Always Ends and Weakened by the Light. Not to be confused with Disappears into Light, which is about characters who dissolve into light after dying.

Should be obvious, but for the sake of fair warning, since this is a trope about suicide, Spoilers abound.

In a future where vampirism is the norm, a child vampire is unable to cope with never growing up and decides to face the dawn.

In a future where vampirism is the norm, a child vampire is unable to cope with never growing up and decides to face the dawn.