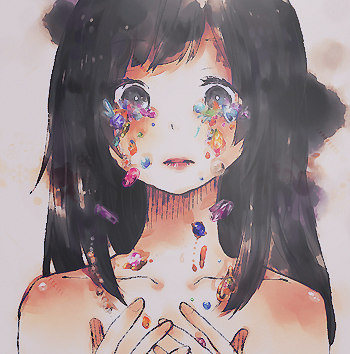 "...and it was so cold and scary in there, that Albi began to cry dragon tears... Which, as we all know, turn into jellybeans!"
— "Albi the Racist Dragon", Flight of the Conchords

Basically, when a bodily fluid or organ becomes a Mineral MacGuffin once shed or forcibly separated. Typically this only happens when the character shedding, bleeding, or cut apart was already highly magical or supernatural, or a spell of some sort was placed on them. In rare cases, a muggle experiencing powerful sorrow or happiness can make this happen by virtue of their incredibly intense emotions.

On the other petrified hand, if taken with violence or from those Made of Evil, these might become highly cursed as a form of revenge.

Likely body parts to be crystalized include:

Compare Organ Drops. Contrast Crystal Prison. The jewels made in this way all benefit from All-Natural Gem Polish. Can be a result of Gemstone Assault if done by someone who can encase people in gems like An Ice Person.