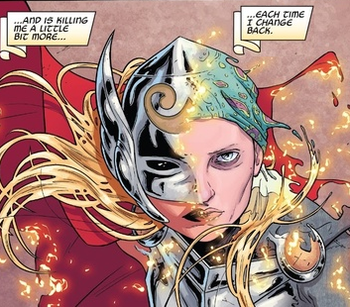 "The transformation neutralizes the effects of the chemotherapy. [...] But not the cancer. Because cancer is just another part of me now."
"Your trip to the sun exposed you to critical levels of stellar radiation, more raw energy than your cells are able to process efficiently. Apoptosis has begun. Cell death. There can be only one outcome, even for you."
— Dr. Quintum, All-Star Superman
Advertisement:

Imagine cancer, that slow insidious death that kills you from the inside, but which is also intrinsically you; it is a body eating itself, and unable to heal. Now imagine that cancer can grow faster whenever you do what you're best at: dancing, painting, coding software, kayaking. This is what happens to characters with Power Degeneration.

The causes can vary. It may be that the process used to make the Clone, Half-Human Hybrid or genetically enhanced character with Super Soldier powers had an inadvertent (or intentional) design flaw (or "birth defect") that slowly reduces their lifespan, limiting their lives to years or months. Other times it's related to having somehow gained superpowers. Maybe it was thanks to Psycho Serum, or the machine/amulet that gave them their powers was broken. Lastly, the powers may just inherently damage the body when used, either as a mystical price or because they are not designed for human use (or rather, the body wasn't given the Required Secondary Powers to handle using the primary ones). Whatever the case, the result is the same: acute "hardware failure" as the body tears itself up from the inside. If they're lucky, they won't cause a Superpower Meltdown that takes out the city.

This last case might be survivable, provided the powers only hurt the owner when used. But it often happens that merely possessing them accelerates the process of aging or the decay. By not using their Super Mode or magic powers they can live normal lives... but The Call Knows Where You Live, so this is rarely an outright option.

The former scenario is usually incurable; it's so hard to Find the Cure! that an entire series can be based around it. The reason is that the clone, hybrid or GM baby would have to fundamentally alter themselves to not be what they are, either by fixing the flaw or becoming plain humans. This can involve finding a geneticist who can make a gene therapy capable of repairing their DNA, a magic ritual that rids them of their human/non-human half, or somehow completely excising what separates them from baseline humanity and being Brought Down to Normal. These people have a very good reason for wanting to be normal.

While the character is afflicted with Power Degeneration, their body will also visibly decay in one or more stylized ways.

Faced with all that, is it any wonder some characters choose to use a less than savory alternatives to extend their life? They might steal the Life Energy of others, discover You Are Who You Eat, or transfer their sickness/symptoms onto others.