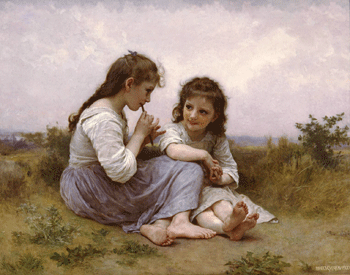 A Childhood Idyll by William-Adolphe Bouguereau, 1900
"Come live with me and be my Love,
And we will all the pleasures prove
That hills and valleys, dale and field,
And all the craggy mountains yield."
— Christopher Marlowe, "The Passionate Shepherd to his Love"
Advertisement:

The gentle, quiet life of the countryside, peopled by souls of wise simplicity living In Harmony with Nature. Arcadia is traditionally populated by shepherds and shepherdesses; more recent versions may also include agriculture.

Idealized often to the point of becoming a Utopia. Generally portrayed as a place where people still stick to the Good Old Ways, rather than being trapped in the city's bustle. (Unkind souls may sneer at them for being old fashioned.) Though the city dwellers may scorn them for their lack of luxury, they are happier for not having to rely on material things for happiness.

The good landscape may be responsible, posing in contrast to Evil Is Deathly Cold, the Shadowland, Grim Up North, urbanized Shadowlands such as the Decadent Court or Vice City, or the Shadowland equivalent found in the Green Aesop; the Polluted Wasteland. In older works (as late as the early nineteenth century), wilderness was not considered attractive scenery; a pleasant view was one of the cultivated countryside, usually with human figures in it, while forests and wildlands were seen as dangerous, savage places and havens of bandits and beasts, making this aspect something of an Evolving Trope.

Arcadia is always the better place in The City vs. the Country. It is not, however, a region free from all evils; the expression Et in Arcadia ego (even in Arcadia I — i.e. Death — am) comments that The Grim Reaper also makes appearances here. Unless, that is, it represents Heaven itself, though this traditional way of depicting Heaven has been largely displaced by Fluffy Cloud Heaven in modern fiction.

A 10-Minute Retirement often brings the character to Arcadia. A character — perhaps a City Mouse who's learned his lesson, or someone who lost his memory, or a Nature Lover who's finally escaped the Vice City — may settle down here for a peaceful life and a quiet romance. The pursuits of Arcadia are often portrayed as bringing life into the world and are more productive than the destructive pursuits of heroes and villains. Depending on how it is depicted, this can range from idyllic leisure to unending and hard work — but this work is never too complicated or stressful, but rather peaceful and fulfilling for a character who was Desperately Looking for a Purpose in Life.

The Country Mouse or the Farm Boy often comes from a (more or less idealized) Arcadia. It often features as Home Sweet Home for an adventurer. Many a Retired Badass and Old Master live here full time, having jumped at the Call to Agriculture. If the question of social relations comes up, it will always turn out to be a Close-Knit Community. The Nature Lover often appreciates it for the greenery. This will almost always be the destination a character dreams about in Big Town Boredom.

A brief visit there is an Arcadian Interlude.

The Noble Savage lives with even less of civilization's goods, but operates on the same principle, although he is usually of a different race than the city folks, unlike the Arcadians — in both cases, by whatever definition of race was current.

Sweet Home Alabama is a Deep South Arcadia. Oireland is usually (though not always) an Arcadia.

Villainous Badland, Heroic Arcadia is where good people live in places like here and the bad guys live in Mordor (more or less).

Contrast Town with a Dark Secret. The Good Shepherd calls on Arcadian imagery. Often involves a society with No Poverty.

Suffice it to say that in Real Life, things are much more complicated. Rural areas may have major advantages, but may also come with serious disadvantages. Some people can't stand life in sparsely populated areas, others can't imagine living anywhere else. In both cases, utopian societies generally don't exist in the real world, and presenting any place as such usually involves ignoring its flaws.

Arkadia is a region in southern Greece, the hilly middle of the Peloponnese peninsula. During the Roman Empire, poets (including Virgil) cast it as the idyllic land of the pastoral. Although thus Older Than Feudalism, it is generally a trope used by city dwellers. Compare it to Wild Wilderness which it sometimes can overlap with also.

When a science fiction (rather than realistic or fantasy) story is set in Arcadia, that's Pastoral Science Fiction.

Although the Land of Faerie is sometimes named Arcadia, it's rarely so idyllic or so safe, to say nothing of its inhabitants.

Not to be confused with Tom Stoppard's play of the same name, or the Duran Duran Spin-Off band. Joan of Arcadia and Skies of Arcadia aren't exactly this either. Not to mention all the other things named after Arcadia on Wikipedia.