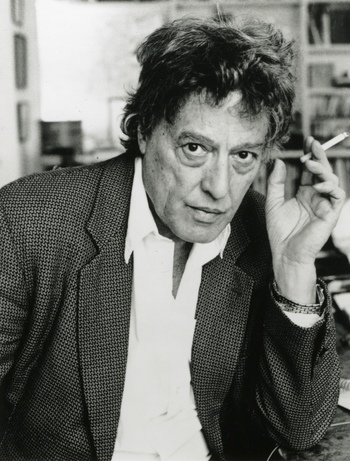 Tom Stoppard (born Tomáš Straussler, 3 July 1937) is a Czech-English playwright, most famous for Rosencrantz and Guildenstern Are Dead.
Advertisement:

Other plays include Arcadia, The Real Inspector Hound, After Magritte, The Real Thing, The Invention of Love, Rock 'n Roll, Travesties, Jumpers, and Dogg's Hamlet, Cahoot's Macbeth, and Leopoldstadt.

Also co-wrote Shakespeare in Love, Brazil and The Bourne Ultimatum, and is reported to have done uncredited dialogue rewrites on Revenge of the Sith and Indiana Jones and the Last Crusade.

He is often associated with the Theatre of the Absurd partially due to the general tone of his work and partially because Rosencrantz and Guildenstern are Dead is essentially one big Shout-Out to the genre's codifier, Waiting for Godot.

Works by Tom Stoppard with their own trope pages include:

Other works by Tom Stoppard provide examples of: