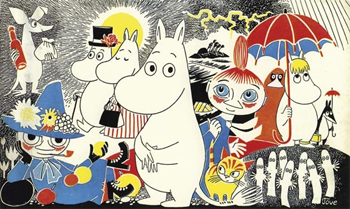 First created as a series of Swedish-language children's books by Finland-Swedish author Tove Jansson, Moomin is a well-loved franchise starring the hippo-like Moomins, who live in Moominvalley and have adventures with their friends. The cast of characters is varied, ranging from childlike humanoids to creatures from all over the world. The books themselves are surreal, often scary, somewhat philosophical, and very interactive. Following the success of the books, the franchise was extended into a comic strip, a string-puppet show, a live-action suit series, a stop-motion animated series, multiple stage plays, three animes, and an animated film, (Moomins on the Riviera). The most recent adaptation is Moominvalley, a CGI animated series for Sky (13 half-hour episodes, premiering in the UK over Easter of 2019, followed by 5 over Christmas 2019 and 8 over Easter 2020, making a total of 26 so far).

Moomintroll, the youthful main character, is the son of Moominmamma and Moominpappa. His friends include Sniff (a mouse/kangaroo-like creature), Snufkin (a carefree and wise wanderer, and Moomintroll's best friend), the Snork Maiden (Moomintroll's egotistical girlfriend), her brother the Snork (who became a bumbling genius in the 90s anime to make up for his complete lack of personality), Little My (the bratty and practical half-sister of Snufkin), the Mymble (her older sister, sometimes called the Mymble's daughter to distinguish her from their mother, also called the Mymble) and a cast of thousands composed of Fillyjonks, Hemulens, Park Keepers, Tofts, Hattifatteners and one big ol' Groke — the monstrous personification of winter depression.

The first few books were surreal, charming adventure stories for kids, which gradually became darker and more adult. The change culminated in the final book in which Snufkin, Mymble, Toft, Grandpa Grumble and the Fillyjonk hang around at the Moominhouse waiting for the absent Moomins (whom Moominpappa has whisked off to live in a lighthouse due to a sudden mid-life crisis). The change in genre accounts for the large cult fanbase. Today, the series is still huge in both Finland and Japan, and the franchise is still very much alive.

Advertisement:
open/close all folders
Books in this series

As well as the main series, there were also four picture books released, which focused more on Jansson's illustrative work than the story.

Adaptations of The Moomins

The first animated adaptation of the Moomins. It debuted on Fuji Television in 1969 and ran until 1970, with 65 episodes. This was followed by a sequel series, known as "Shin Mūmin" or "New Moomin", in 1972, with a further 52 episodes.

Both versions are infamous for author Tove Jansson's less than favourable views on it, and were never aired outside of Japan as a result, but was nevertheless a big hit for the audience.

Tropes exclusive to the 1990 anime:

The second anime adaptation of the Moomins, and arguably the most internationally well-known version of the series. It aired in 1990 and ran for one season of 78 episodes, and like the earlier anime, resulted in a sequel series titled 'Bouken Nikki/Adventure Diary', which ran for 26.

The show was a huge success, being dubbed in to at least 20 different languages, and frequently repeated far into the early '00s in a number of countries. Interestingly, the show never made it to the States, only broadcasting in the region of Hawaii.

The existence of this series helped create the second "Moomin Boom" through the '90s, after its initial surge of popularity in the '50s. It spawned one film, an adaptation of Comet in Moominland, and multiple video game releases based on the continuity of the show.

As of 2020, all episodes of the first series are available to watch on the official Moomin youtube channel

The Moomin franchise provides examples of:

The Groke freezes everything she touches wherever she goes.

The Groke freezes everything she touches wherever she goes.