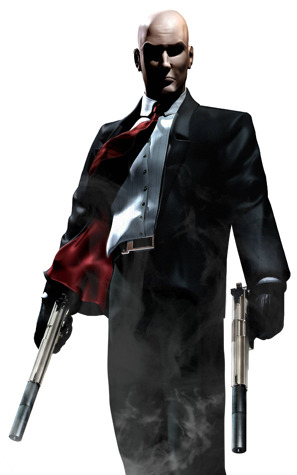 Back in business.
Hitman 2: Silent Assassin, released in 2002, is the second game in the Hitman series by IO Interactive.
Advertisement:

Some years after the events of Codename 47, the famed contract killer has given away his fortune and taken refuge in a monastery to atone for his life of crime. A changed man? Regrettably (for the mob), he is forced out of retirement by his Sicilian friend's mysterious kidnapping. The price tag for Father Vittorio's freedom is $500,000 — Money that 47 no longer has. It appears that his large donation to the church has attracted the attention of the local mafia don who wants a piece for himself. This spurs 47 to reconnect with The Agency and ask them for help. Praise the Lord...and pass the ammunition.

So it's time for another jaunt around the globe, beginning in Mr. 47's stomping ground of Sicily and onward to: the streets of St. Petersburg, the mountains of Japan, the Petronas Towers in Kuala Lumpur, cities and terrorist hideouts in Afghanistan and a religious community in the Punjab region of India.

The gameplay was very ambitious for the time — not to mention riddled with bugs. Regardless, it plays much more stealthily than the original and introduces elements that would become iconic to the franchise. (Hitman unveiling his signature pistols, for one.) Other new stuff:

It's worth mentioning a few other toys that were deployed in SA before they became permanent fixtures: little things like lobbing a distraction (Diana's pager, or honking a car horn), clinging to balconies, crawling through vents, ducking a surveillance camera, or leaving behind a remote-controlled mini-bomb. Also, rival hitmen who aren't mentioned in the briefings will suddenly appear to harass you, which should be familiar to fans of Blood Money. "The Jacuzzi Job" even introduced the notion of making kills look like a "robbery" or "accident".

Not to be confused with the much later, similarly named, seventh entry of the Hitman Franchise; Hitman 2, the sequel to 2016's Hitman.