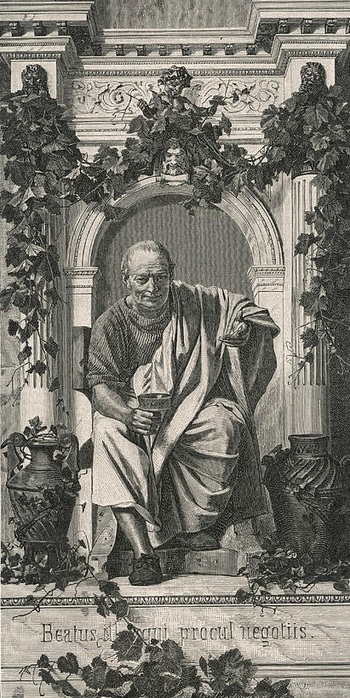 Drawing by Anton von Werner
"Give up trying to learn — knowing is wrong! — what span of life the gods
Plan for me or for you, Leuconoë, draw up no more of these
Babylonian charts. Simply accept all that the future brings,
Whether Jupiter means we are to know many a winter more
Or makes this one the last, now dashing waves over the porous rocks
Of Tyrrhenian shores. Show yourself wise: strain the wine clear, and trim
Lengthy hope to the short space of our lives. Envious time escapes
Even now as we speak. Harvest this day, discount tomorrow's gains."
—Quintus Horatius Flaccus, Odes, Book I, Ode xi (translation by Charles E. Passage)
Advertisement:

Quintus Horatius Flaccus (8 December 65 – 27 November 8 BC), better known as Horace, was a leading Roman poet during the time of Augustus Caesar. He is best known for his odes, which the rhetorician Quintillian deemed the only Latin lyrics worth reading; one of these odes, and his Ars Poetica, a verse letter in which he gives advice on writing poetry and drama. His eleventh ode from the first book of odes is the source of the aphorism "carpe diem".

Horace was born in Venusia, as he himself relates, of a father who was a freedman and a collector of taxes, and even then, it has been thought, a dealer in salt fish. Called up for the Philippi campaign, Horace obtained a tribuneship of soldiers from General Marcus Brutus, and when amnesty was granted by the winning side he procured an appointment as scribe in a quaestor's office. But finding favour first with Maecenas, then with Augustus, he held no ordinary place in the affections of both. Maecenas esteemed him highly, as attested in his epigram: "ni te visceribus meis, Horati, / plus iam diligo, tu tuum sodalem / Ninnio videas strigosiorem", or "If more than my own vitals, Horace, I do not cherish you now, may you see your boon companion more wasted than Ninnius".

Augustus also offered Horace the post of secretary, and was not angry when he refused, saying in one of his letters: "Make yourself at home with me as if you were a member of my household; you will be helping yourself, and not for nothing, whereas I have wanted the benefit of your company, if your health permits."

He spent most of his life in Sabine or Tiburtine retreats, and his house was pointed out near Tiburnus's grove.

He died on 27 November 8 BC, naming Augustus as his heir before witnesses when, because of extreme weakness, he was unable to sign the tablets of his will.