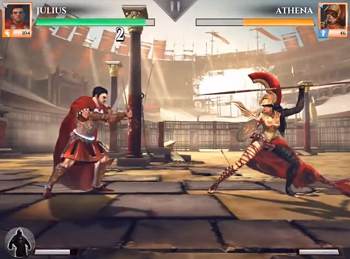 A sister trope to Mayincatec, Spexico, Far East and Scotireland, a tendency for writers to overlap the Greek and Roman civilizations and confuse aspects of the two Classical civilizations, e.g. Roman numerals in an otherwise Greek setting, Greek gods in Rome, and vice versa, et cetera. No relation to Oxbridge; that one is a commonly accepted overlap.

Though this trope is due in large part to research failures, the Romans themselves are not blameless. They were heavily influenced, and totally transformed, by the Greeks who they conquered fully in 146 BCE. One of the most blatant examples is Classical Mythology. Other examples can be found in politics, science, the hyper-realistic statues, et cetera. Most of the statues of Classical Greece come down to us via Roman copies. The Romans generally were quite open about their love and debt to Greek civilization, and borrowed their ideas, concepts, and motifs from their neighbors. Many of Rome's greatest historians, including the first one (Polybius), were Greek (e.g. Plutarch, Appian).

Roman authors had a habit of inserting Greek quotations into their works, and even one of the few Romans who made a fuss about Greek culture, Cato the Elder, secretly learnt Greek and sent his children to study it. Greece was regarded as the source of culture, philosophy, science and learning in general, and Greek was seen as a symbol of cultivation and intelligence (and no doubt the Romans also thought it was downright awesome) hence why science, mathematics, philosophy and the like have a massively bad tendency to do this, reinforcing the idea that intellectuals, scientists, mathematicians and such know both Latin and Greek. Romans of the late Republic and early Imperial era tended to use quite a lot of Greek in their speech (to the point where the letters Y and Z, not ordinarily used in Latin, had to be appended to the alphabet due to their frequent use in Greek loanwords), and Caesar is said to have quoted a play by Menander, a Hellenistic Greek, when crossing the Rubicon.

The Romans would also continue placing plays in Athens or other Greek cities, to avoid slandering the state, but leave everything else Roman-like. The epics of Homer inspired the The Aeneid of Virgil (even though it was actually an attempt to connect Rome's distant past with Greece's enemies, by making Romans the descendants of Trojans), and authors such as Seneca the Younger wrote using Greek styles albeit adding more imitations and innovations (chiefly incredibly graphic descriptions of violence for which he became proverbial). The Roman Emperor Nero visited Greece in 66 AD, and performed at the Ancient Olympic Games, despite the rules against non-Greek participation. Also, due to massive Greek colonization (mainly before the rise of Rome), part of southern Italy was known as Magna Græcia (Μεγάλη Ἑλλάς, Megálē Hellás) — "Great Greece."

While Latin was the official language in Rome, Greek was the Lingua Franca of the eastern half of the Roman Empirenote In the western half of the Empire, the lingua franca really was (Vulgar) Latin, which, in those countries that were not conquered by Germans or Arabs (and even some that were) became the Romance languages and Latin was the language of the military and administration everywhere. The vast majority of the New Testament was originally in Greek as a result, as it was written for a diverse audience living in the eastern half. This is also why when the Roman Empire was formally split into the Eastern and Western Roman Empires, the Eastern Roman Empire (what would later come to be known to historians as the Byzantine Empire) had Greek as its official language from 7th century onwards.

It would probably be valuable to note, at this point, that "Ancient Greece" is itself a lesser example of Cultural Blending; see Ancient Greece.

When Ancient Grome meets language, you get Canis Latinicus.

Has nothing to do with Gnomes from ancient civilizations, or with the King of the Earth Elementals in the Elric of Melnibone universe.