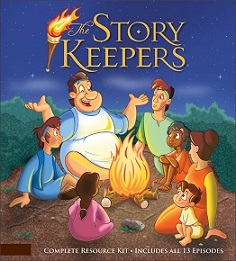 We'll carry on His word...
"Rome, 64 A.D. The Emperor Nero has unleashed his fury against the Christians. Their crime: proclaiming a king higher than Caesar. Setting fire to the city, Nero places the blame on the Christians, and launches a new campaign to wipe them out. Families are separated, children left homeless, as thousands are sold into slavery or thrown to the lions. Escaping the panic of the fire, and dodging the advancing soldiers, a group of children find shelter in the gentle care of Ben and Helena: a local baker and his wife. Here, the children discover an amazing secret network of daring men and women, who risk their lives to help one another and to tell the stories of the great storyteller: the one called Jesus. And so, awaiting the day when their parents will return, Anna, Cyrus, Justin and Marcus embark on the adventure of a lifetime, together with Ben, Helena, and their friends in the Christian underground. Their mission: to keep the stories of Jesus alive. This is their story. They are the Storykeepers!"
— Opening narration
Advertisement:

It's A.D. 64, and the infamous fire of July 18 has separated four children from their families. The kids, Anna, Cyrus, Justin and Marcus, find shelter with Ben and Helena, a Jewish baker and his wife. They also discover that Ben is the leader of one of Rome's underground churches, and is known as a storykeeper; that is, someone who passes on the stories of Jesus' life and ministry. Together with teenage Zealot Zakkai, the kids and their guardians go through many adventures during their search for the kids' missing parents, all the while spreading the stories of Jesus and trying to avoid Nero's ever-tightening noose on Christianity in Rome.

Storykeepers was a children's cartoon produced by Zondervan and Focus on the Family from 1995 to 1997. It comprised 13 episodes and two holiday compilation specials. Three of the last four episodes make up The Easter Storykeepers, a project for which more famous voice talent was brought in.

Glory Be To Me

Tim Curry does what he does best as Nero

Glory Be To Me

Tim Curry does what he does best as Nero