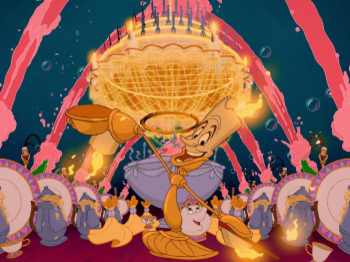 "Some day, my prince will come,
Some day, we'll meet again,
And away to his castle we'll go,
To be happy forever I know..."
— Snow White and the Seven Dwarfs, the original Trope Maker
Advertisement:

One of the more well-known tropes associated with Western Animation, which like so many others was made and codified by Walt Disney.note Mainly as an extension of his previous Silly Symphonies shorts, which were made to advertise music and thus featured at least one song tying into each short.

During the 20th century, certain animated films tended to double as designated musicals in which, at certain points in the storyline, the characters would sing musical numbers that resonated with the overall theme of the moment. The heroes would mostly sing confidence/Power of Friendship-friendly numbers while the villains pretty much sung about how superior they were for their disrespect for the greater good. Did we mention there were also some love songs in there, too?

Due to musicals in general falling out of fashion in the late 1960s, the whole concept pretty much went Dead Horse Trope until it was revitalized in the 1990s by Howard Ashman and Alan Menken (previously best known for Little Shop of Horrors), with the juggernauts of The Little Mermaid (1989), Beauty and the Beast and Aladdin. Notable that they were more like stage musicals than previous entries in the Disney Animated Canon, with more songs more integrated into the plots. All three were also later adapted into Broadway stage musicals.