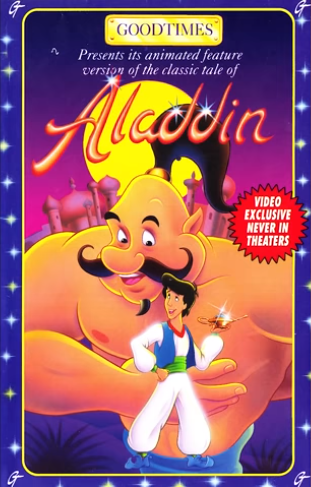 How can you resist the "video exclusive never in theaters"?
Aladdin is a 1992 animated film by Golden Films and GoodTimes Entertainment about the story of Aladdin.
Advertisement:

Aladdin and his mother are poor, until a person called Haseem pretends to be the brother of the deceased Mustafa and uncle of Aladdin. Haseem brings Aladdin to a cave with a magic lamp, with the lie that there he and Mustafa played. Aladdin discovers all was a lie when he sees Haseem doing magic tricks, and tries to escape, but Haseem drops his cane to him to prevent it, and threatens to kill him.