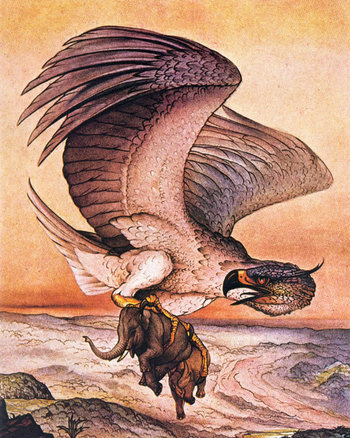 Spike: Dragons are scared of rocks?
Smolder: R-O-C-S. Rocs? Humongous birds of prey that can snack on a molting dragon like candy!
— My Little Pony: Friendship Is Magic, "Molt Down"
Advertisement:

A very specific form of Giant Flyer hailing from Arabic and Persian folklore, the roc (sometimes spelled ruk or rukh) typically takes the form of an eagle of stupefying size. Additional embellishments are rare, but they may sometimes have two heads. Rocs are universally much bigger than the usual brand of predatory flying monsters, which tend to be "merely" big enough to carry off a man in their talons. The rocs' size is usually brought to deliberate extremes; generally, they are in the same size range as flying dragons or airplanes.

The rocs' mind-boggling dimensions are sometimes used to emphasize the strangeness, wonder and exoticness of the areas they are found in — something so huge, such as vast and exaggerated version of a common animal, is so unlike anything one could find in a normal, familiar setting that the presence of a roc leaves no doubt that the story has crossed into somewhere strange and wondrous. As such, rocs are often placed in unexplored areas ripe for adventure stories — the Island of Mystery is a particularly common nesting spot — especially ones tied to "Arabian Nights" Days, Mystical India, and neighboring locations in the Hollywood Atlas.

Their size also allows rocs to play an exaggerated version of the role of the Kidnapping Bird of Prey; they traditionally prey on large animals, from cattle and horses up to elephants, rhinos, and whales, and may sometimes prey upon other large monsters. They rarely target individual human-sized characters due the sheer size difference, but may easily be able to carry away an entire ship or boat in their talons.

These creatures are especially likely to appear in stories associated with Sinbad the Sailor. Humor may sometimes be derived from the similarity between the words "roc" and "rock", whether in the form of rocs made out of actual rocks or characters confusing one word for the other.

Obviously, no flying bird in real life approaches the size of the mythical Roc. However, there is a theory that the myth was inspired by sightings of the extinct elephant bird

of Madagascar, which died out around the year 1200. The name "elephant bird" even comes from Marco Polo's description of a giant bird on Madagascar big enough to carry off an elephant. Elephant birds, of course, could not fly, but they could have been mistaken for the babies of a much larger bird. Another extinct Madagascan bird, the Malagasy crowned eagle

, may have also inspired the Roc myth. This large bird of prey had a wingspan of up to six feet, and was one of the chief apex predators of the island until going extinct by around 1500. They may have been mixed up with accounts of the aforementioned elephant birds, which over time, would have resulted in rumors of gargantuan eagle-like birds living on Madagascar. Historically, supposed roc feathers were often given as gifts to kings, and Marco Polo claimed to have seen one given to Kublai Khan and describes them in his accounts as being twice the width of a man's hand. Many believe that these were probably actually the leaves of the raffia palm

While this trope most often refers to the roc bird itself, other mythical giant birds of prey of a similar nature from other nationalities may also fall under this trope, with examples including the Native American Thunderbird, the Jewish Ziz,

or the Chinese Peng.

See also Rent-a-Zilla, Giant Flyer, Feathered Fiend, Dire Beast, and Kidnapping Bird of Prey. Not to be confused with the rook

, a Real Life crow-like bird from Eurasia (although the chess piece known as the rook may have been inspired by the roc, and in German castling is called "Rochade").

With their wingspan rivaling that of a small plane, Stormbirds may well have been inspired by the ancient legend of the Roc.

With their wingspan rivaling that of a small plane, Stormbirds may well have been inspired by the ancient legend of the Roc.