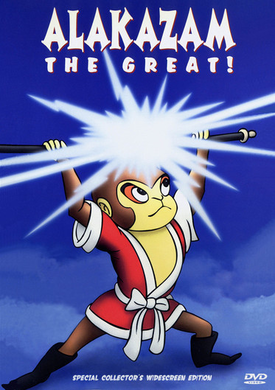 "I wish I could say that Alakazam was a good king or a wise king. But he wasn't. He was rude and arrogant. As a matter of fact, he was a bit of a crab about the whole thing. I suppose you could say that his crown went to his head."
—Narrator, about Alakazam.
Advertisement:

Alakazam the Great is a 1960 Anime film by Toei Animation based on Journey to the West. It is adapted from the manga Boku no Son Goku by Osamu Tezuka. It was released by American International Pictures in the United States in 1961, and was one of the first Anime films to be professionally dubbed in English.

Its story concerns Alakazam, a simple monkey who becomes King of the Monkeys. He instantly becomes Drunk with Power and mistreats everybody around him, including his girlfriend Dee Dee. He forces Merlin to teach him magic, and goes off to Majutsu Land to cause trouble. He's finally beaten and imprisoned by King Amo. He's sentenced to become the bodyguard of Amo's son, Prince Amat, who's about to go on a great pilgrimage. And Amat will need the help, for there are many demons waiting to cause him trouble.