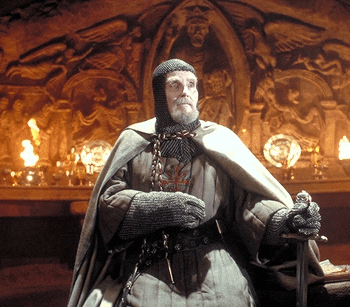 Greetings, Adventurers! Welcome to the Archive of Backstory and Plot Advancement! Who am I? Why, I am the Ancient Keeper, and I take care of the place. It is my job to dust the bookshelves, change the lightbulbs, polish the Lost Technology, and provide doddering, yet helpful exposition to any and all heroes who happen to stumble within my realm of influence. Want to find the way to the next plot point? I can point you there. Want to discover the true nature of the Government Conspiracy threatening mankind? You'll find that information in that red book on the back shelf three rows down. Want to know the secret past of the hero's father? Look in that pile of dusty, rolled up scrolls over there. Want a copy of the blueprints containing the schematics to the villain's Unstoppable Superweapon? I have that on microfiche. Just walk this way and I'll show it to you.

Oh, before I do so, as an Ancient Keeper, I am contractually required to ask you if you'd like to have a spot of tea with me, and then wistfully remark about how extremely lonely I am, not having seen a single living soul for several centuries now. How do I manage to look so good despite my advanced age? Well, it's easy when one is an android/hologram/helpful ghost / Living Relic designed to fulfill viewer's expectations of what an Ancient Keeper of Knowledge should look like/magical construct/magician. Also, Purpose-Driven Immortality is part of the standard benefits package. Now if you would, walk this way...mind the creaking floorboards and that stack of stone tablets with the glowing cuneiform on it......

Huh? What's that? You say I look kind of creepy and you wonder if I can be trusted? I assure you, my good man, the information I reveal to you is not only entirely accurate, but extremely helpful. I am required to provide equal assistance to all visitors regardless of importance or heroic status, even if I AM in the employ of the Big Bad. Which I may or may not be. Also, I assure you, I do not have my own agenda and would not harm you in any way. Now if you'll just finish drinking your tea—which I assure you has not been poisoned—I'll show you the way to the Ancient Planetarium which will reveal to you the solar system where the parts to the series' Magical MacGuffin are hidden....

You say the Ancient Order of Protectors and the Threshold Guardians tried to kill you on the way in? Well, my, my, isn't that something...* Psst! Guys, guys! What'll we do now?!