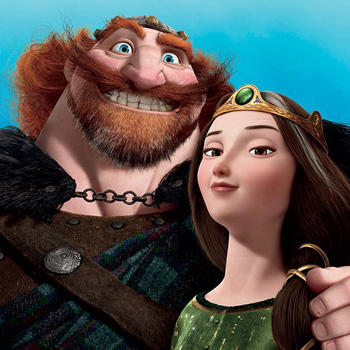 Well, it's easy to tell who their daughter Merida gets her good looks from...and where she gets the red hair from.
Priest: If there is anyone here that would oppose this holy union, speak now or forever hold your peace.
Lucifer: Excuse me. Yeah, I have a problem. Has anyone else noticed how incredibly, jaw-droppingly, loin-stirringly beautiful this young woman is and how short, sweaty and altogether fugly this homunculus is? I mean, what is this... a wedding or a kidnapping?
— Lucifer, "Pilot"
Advertisement:

In addition, the trope both reveals and helps maintain one of the most wide-spread cases of a Double Standard around with regards to acceptable levels of attractiveness for leading actors and actresses. While actors are held to a high standard of attractiveness, there are still leading roles available for plain looking guys, funny fat guys, and average joes (especially in comedy, which is one of the main reasons why this trope is so common in sitcoms). Many times, the guy is overweight due to the stigma. The beauty standard for women, however, is much higher; in order to be a leading lady it is an unspoken prerequisite that you are at the very least physically attractive. Therefore, the reverse (Hot Guy, Ugly Wife) is almost unheard of. And if it is present, it is usually played for laughs. Basically, it's positive discrimination for men in-universe while remaining plain old-fashioned discrimination out-of-universe.

See also Beast and Beauty, Give Geeks a Chance, Nerd Nanny, No Accounting for Taste, Hot Consort, Attractiveness Isolation, What Does She See in Him? and Kavorka Man; and don't forget that Most Writers Are Male. May overlap with Age-Gap Romance or May–December Romance, if the man is old on top of being ugly (or is ugly simply as a result of being old). It can also overlap with either Huge Guy, Tiny Girl (if the guy is a misshapen hulk or even a literal monster) or Tiny Guy, Huge Girl (if the guy is a shrimpy troll of a man). This trope often gives birth to The Ugly Guy's Hot Daughter and both Monster Brother, Cutie Sister. Contrast Model Couple and Hot Guy, Ugly Wife. Messy Male, Fancy Female is a similar trope involving animals. This trope plus Bizarre Sexual Dimorphism equals Sexy Dimorphism, where male members of a fantasy race are monstrous or otherwise inhuman, but females look like attractive women.

Note that it's Ugly Guy, not Average Guy note As attractiveness is subjective, the general rule of thumb should go that unless if the guy isn't outright considered ugly In-Universe, he is either overweight, dorky looking, dorky acting or has personality issues (like rude table manners) that wouldn't compensate for a mediocre appearance, and his wife/girlfriend must be conventionally attractive. Also note that this trope's name is not Scary Guy, Hot Wife. Being scary is not the same as being ugly. Although it may stil count if it is mentioned in-universe.

They are currently estranged, but still married. La Muerte is a beautiful goddess of the dead made out of sweet candy, but Xibalba is basically a skeleton with wings, armor, and a Sickly Green Glow, made out of tar and everything icky in the world.

They are currently estranged, but still married. La Muerte is a beautiful goddess of the dead made out of sweet candy, but Xibalba is basically a skeleton with wings, armor, and a Sickly Green Glow, made out of tar and everything icky in the world.