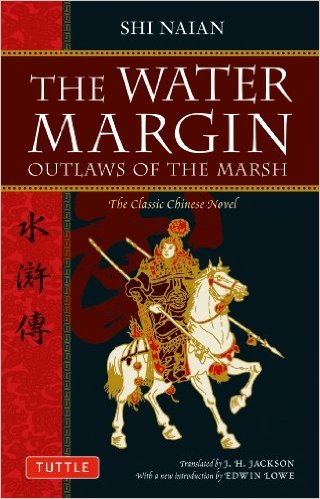 along with Journey to the West, Romance of the Three Kingdoms and Dream of the Red Chamber.

The novel was written during the 14th century, although it is clearly based on older folk stories. Authorship is traditionally attributed to two authors, Shi Nai'an and Luo Guanzhong, but modern scholarly opinion is that Shi Nai'an is simply a pen-name for Luo Guanzhong, who also wrote the definitive version of Romance of the Three Kingdoms.

The story is based on the Real Life adventures of a famous bandit, Song Jiang, who along with his companions surrendered to the Imperial authorities in 1121. The plot follows the various backstories of every one of the 108 outlaw protagonists, then their gathering together under the leadership of Song Jiang, and finally their deaths while fighting a desperate battle on behalf of Imperial authorities.

The earliest surviving example of the Wuxia genre, Water Margin has been translated many times, and adapted to other media such as film, television and comics. Probably the best known adaptation is the successful 1973 Nippon Television series which was broadcast in many countries, effectively introducing this epic work to Western popular culture. Perhaps the second best known, and much much looser, adaptation is the Suikoden video game series. Mostly just the first game, with the rest drawing basically nothing from the original story other than the concept of 108 protagonists. (Other video game adaptations include Koei's Turn-Based Strategy game Bandit Kings of Ancient China and Data East's Fighting Game Outlaws of the Lost Dynasty.) The third known adaptation of the story is the cartoon Hero: 108.