Film / Attack of the Giant Leeches 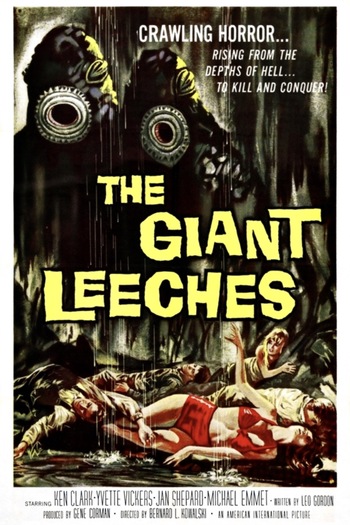 It doesn't suck quite as much as you'd expect.
Advertisement:

Attack of the Giant Leeches is a 1959 monster movie executive produced by Roger Corman and directed by Bernard L. Kowalski, about... well, an attack by some giant leeches.

When backwoods Florida shopkeeper Dave Walker (Bruno VeSota) discovers his hot but hostile wife Liz (Yvette Vickers) has been having an affair with his best friend Cal Moulton (Michael Emmet), he pursues the offending couple into the swamp with a shotgun. But before he can exact his revenge, the pair are dragged under the water by a couple of enormous slug-like creatures.

While Dave is arrested for the murder of Liz and Cal, game warden Steve Benton (Ken Clark) conducts a search for the victims, aided by his girlfriend Nan (Jan Shepard) and her father Dr. Greyson (Tyler McVey). Lots of footage then ensues of Steve and Nan rowing through the Everglades, even as people continue to disappear. Finally, Dr. Greyson uses dynamite — against Steve's orders, no less — to inadvertently dislodge a bevy of corpses, giving the heroes an idea where to look for the other victims. Steve dons an aqualung and a speargun and dives down to do combat with the giant leeches before more dynamite is used to finish them off.

For the Mystery Science Theater 3000 episode featuring this film, go here. It also got The Remake treatment in 2008.

This movie leeches off of the following tropes: