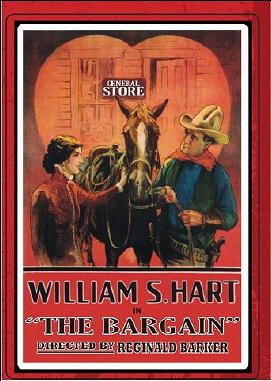 The Bargain is a 1914 film directed by Reginald Barker, starring William S. Hart.

It is set in 1889 in the Arizona Territory. Jim Stokes, "the two-gun man", is a notorious bandit. He waylays a stage carrying a gold shipment and successfully makes his escape, but not before being wounded and having his horse shot out from under him. Alone in the desert and suffering from dehydration and loss of blood, Jim is saved by Phil Brent, a prospector. While recuperating at Phil's cabin—he tells Phil he was waylaid by Indians, already an unlikely excuse in 1889—he falls in love with Phil's pretty daughter Nell. Jim, now a changed man, resolves to return the bank's money and start a new life with Nell. Unfortunately for Jim, he is still a wanted man, and someone recognizes him.

Feature film debut for William S. Hart (he had previously appeared in two shorts). He was fifty years old and had a long career on the stage behind him when he decided to give the movies a shot. Hart became an instant star and spent the next decade making cowboy movies before retiring.