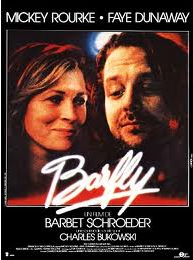 "Some people never go crazy. What truly horrible lives they must live."
Advertisement:

Maybe it is a movie about two people, a man and a woman, who make a disillusioned attempt to change their life from a series of drinking bouts to a traditional homely model which will give them the feeling of safety.

But maybe it is about three people, a man and two women, who constitute a Love Triangle in which one woman makes a myth out of the sad reality and the other strives for making reality out of a myth, and man stands between them and waits for the ending of the conflict.

Or maybe it is simply about one man with the life of a drunkard and the mind of a poet, who tries to find out what should be his final attitude towards illusions.

Of course, there is also an unpleasant possibility that it is simply about sex, bar fights, and cheap philosophy.

Anyway, the main character, Henry Chinaski (Rourke), is an Author Avatar for Charles Bukowski, who also wrote the film's screenplay. His life consists of drinking and bar-brawling, apparently for no other reason than that the sole existence of his archnemesis, Eddie (Frank Stallone), infuriates him (the feeling is mutual, so he has many occasions to fight). Once more beaten by Eddie, he returns to the bar and meets Wanda Wilcox (Dunaway), a classy but crazy heavy drinker, with whom he fells in love at first sight. They get to live together, drink together, and sleep together. He is even planning to get a job. Little does he know that Tully Sorenson (Alice Krige), a young female intellectual and the owner of a literary magazine, got fascinated by his short stories and hired a private detective (Jack Nance) to find him so that she could convince him to change his life, move to the upper class and become a full-time writer. With their meeting comes the understanding that he is just unable to be anyone else than himself.