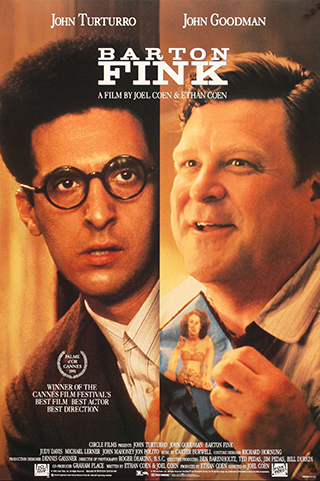 Barton Fink is a 1991 film by The Coen Brothers. Barton Fink (John Turturro) is a playwright who has gotten a contract to write movies. The enthusiastic studio executive tells him to write a wrestling picture.

Getting a bad case of Writer's Block, he meets Charlie Meadows (John Goodman), an insurance salesman, novelist turned hack screenwriter "W.P. Mayhew" (John Mahoney), his mistress (Judy Davis), an excitable producer, and a cast of others.

Notable for earning three awards at Cannes, it contains elements from numerous genres, being somewhat of a comedy-Film Noir-mystery-horror-drama.