Through the Eyes of Madness 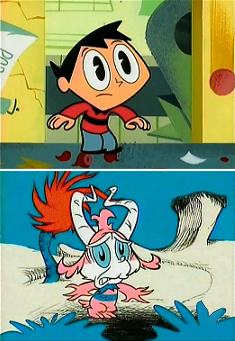 Dr. Seuss is probably rolling over in his grave.
"Yesterday upon the stair
I met a man who wasn't there.
He wasn't there again today
Oh how I wish he'd go away."
— Hughes Mearns

The creepy, foul-smelling uncle of the Cuckoo Nest, this trope makes a point of obscuring the objective truth of the tale in order to screw with the audience's minds. Sure, we see the grotesque tendril moving under the neighbor's skin just like the protagonist does, but who says the camera is telling the truth? Then again, there's never any conclusive proof that he's not a monster either. By their very nature, these stories end without any definite decision as to what was really going on.

Compare to Only Sane Man; in it the Only Sane Man, along with the audience, is sure that the strange thing is real and everyone else just turns a blind eye on it, while this leaves it ambiguous. Another key difference is that trope is often used for comedic effect while this trope is horrific if done properly.

Unlike the Cuckoo Nest, there isn't an "either/or" pair of realities that can be switched between, or a truthful reality waiting to be accessed — just a long, horrible descent into the darkness of the human mind.

Compare Unreliable Narrator, for instances in which this character is telling the story. Is often Paranoia Fuel at its purest, if done well. Contrast Maybe Magic, Maybe Mundane. If madness gives a person the ability to see real things that others can't, that's a variety of Power Born of Madness.

Very often overlaps with Mundane Horror, which is basically Truth in Television, since many mental disorders, including schizophrenia, add horrifying hallucinatory details to everyday life.

If it's clear that it's not all in the protagonist's mind and the danger is real, then the main character is Properly Paranoid. If someone is deliberately messing with someone in such a way that resembles this trope, that's Gaslighting. If the madness conceals the fact that the protagonist is a murderer, that's The Killer in Me. If the work chooses to show the underlying truth, it may do so by Cutting Back to Reality.

See also Delusion Conclusion, when the audience dismisses the plot of a work as this trope.

Expect some spoilers here. In many works, the fact that the viewpoint character is crazy is a major Twist Ending.

open/close all folders
Anime & Manga
Comic Books
Comic Strips
Fan Works
Films — Live-Action
Literature
Live-Action TV
Music
Myths & Religion
Podcasts
Tabletop Games
Theatre
Video Games
Visual Novels
Web Animation
Web Comics
Web Original
Web Videos
Western Animation
Real Life
"… you think this is too horrible to have really happened, this is too awful to be the truth! But, please. It’s still hard for me to have a clear mind thinking on it. But it’s the truth even if it didn’t happen."
— One Flew Over the Cuckoo's Nest

Alternative Title(s): The Mouth Of Madness