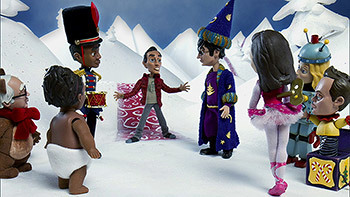 From left to right: Teddy Pierce, Baby Doll Shirley, Troy Soldier, Abed, Christmas Wizard Duncan, Ballerannie, Britta-Bot, and Jeff-in-the-Box.
"Fair warning, guys. A journey through Winter Wonderland tends to test your commitment to Christmas. So when I say test, I mean Wonka-style. I'm talking dark. My advice: Stay honest, stay alert, and for the love of God, stay between the gumdrops."
— Abed
Advertisement:

It's Christmas time again for the study group when Abed announces that everything's in Stop Motion animation. The group, suitably worried, take Abed to Professor Duncan for therapy. Though Abed at first rejects this, he's tricked into going to the study room for a group therapy session... Which he immediately turns into a magical trip through the mind, Willy Wonka-style.

To accomplish this, he turns his friends into variations of toys from the Island of Misfit Toys (see image). Now they have to trek through the Winter Wonderland wilderness, avoiding the perils along the way, going through the Cave of Frozen Memories, all to reach the North Pole and find the True Meaning of Christmas.

Troy: Man, it is cave-like in here.
Pierce: What do you mean, cave-like? It's a cave.
Feedback

Example of:
True Meaning of Christmas