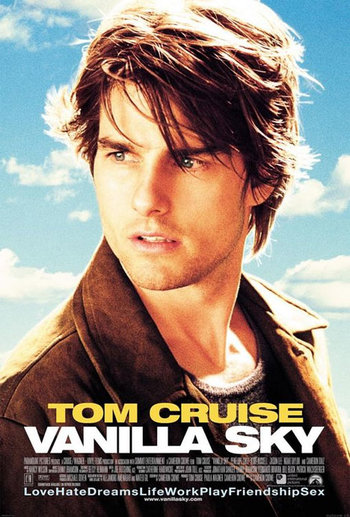 "The sweet is never as sweet without the sour."
Advertisement:

David Aames (Cruise) tells the story from a prison cell to his psychiatrist, Curtis McCabe (Kurt Russell), while wearing a prosthetic mask he refuses to take off: David was a Millionaire Playboy who inherited a publishing company after the death of his father. He met Sofia (Penélope Cruz). As they became instantly attracted to each other, he brushed aside his "fuck buddy", Julianna (Cameron Diaz). When Julianna heard of this, she tried to kill herself and David in a car accident. She died, but David survived with a disfigured face. He is haunted by increasingly bizarre occurrences.

This movie is a remake of 1997 Spanish film Open Your Eyes ("Abre Los Ojos") by Alejandro Amenábar. Penelope Cruz plays the same role in both movies.