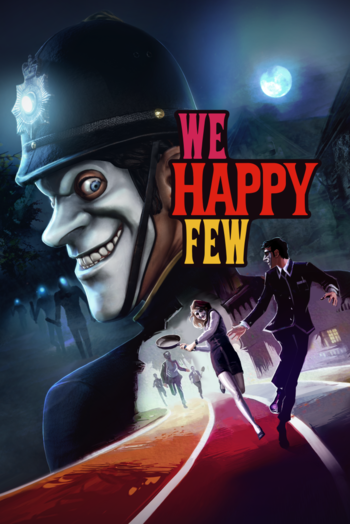 Lovely day for it!
Victoria: Truth is the enemy of happiness! Isn't that the decision we all made?
Ollie: Oh... But you know the truth, don't ya?
Advertisement:

We Happy Few is a Story-driven first-person survival game, taking place in and around the city of Wellington Wells, located in England in an alternate version of the 1960s or late 1964. In this alternate timeline, Germany managed to launch a full invasion of England during World War II, and the people of Wellington Wells did A Very Bad Thing in response. To forget what they did, the people of Wellington Wells started taking Joy, a medication that removes their bad thoughts and feelings and allows them to live in relative bliss. They are helped along by Uncle Jack, whose shows play on public TVs throughout the town and reminds people to always take their Joy.

You play as one of several characters in different scenarios, almost all of which are locked behind DLC content and make their appearance as side-characters in the default story.

The default character and his attendant story is a man named Arthur Hastings. Arthur is a Downer, someone who has stopped taking Joy, and can now see clearly. Unfortunately for him, the Wellies really don't like Downers, and they'll kill to keep their town happy. It's up to Arthur to find a way through the crumbling city of drug-addled psychopaths and reach freedom beyond the town's borders... or die trying.

"Sally's Story" focuses on Sally Boyle, mother to the only child born in Wellington Wells since The Very Bad Thing... which is not good, since one of the effects of Joy use is homicidal mania towards pregnant women and children. Whilst she has been able to use her skills as a chemist to escape attention so far, particularly in the creation of Blackberry Joy for the police force, she is desperate to flee to safety with her daughter beyond the reach of the "Wellies".

"Ollie's Story" focuses on Oliver "Ollie" Starkey, a half-crazed and violently temperamental Scottish soldier who has decided that he has to find out just what the true history of Wellington Wells is and why nobody seems to be doing anything to fix this place.

"Roger & James in: They Came From Below!" is a Genre Shift to an Alien Invasion, as scientists (and secretly gay lovers) Roger Bacon and James Maxwell, assistants to the Mad Scientist Dr. Helen Faraday, find themselves at the forefront of an invasion of Wellington Wells by mysterious alien robots.

"Lightbearer" focuses on Nick Lightbearer, a major rock star in Wellington Wells who fears that he may have been murdering people as the infamous "Foggy Jack" whilst in drugged out hallucinations. The DLC focuses on his quest to sober up, learn the truth, and get out of Wellington Wells, before his crazed fans kill him for being a Downer.

"We All Fall Down" is the final DLC, taking place in the last days of Wellington Wells. With its population too addled by Joy to undertake the basic necessities of growing food or repairing damaged infrastructure, and all contact cut off with the outside world, Wellington Wells is on its last legs. Starvation and plague run rampant, and the Wellies still cling to their Joy even as they die. The last sane survivor in the entire city, Victoria Byng, decides that enough is enough and she has to cut off the flow of Joy to the Wellies before they starve.

We Happy Few, developed by Compulsion Games, was released on July 26, 2016 as an early access title for Windows, Playstation 4, Mac, Linux, Steam, GOG.com, and the Humble Store, and an Xbox Game Preview title on Xbox One. The full release was planned for April 14, 2018, though this was later pushed back to mid-summer. The game was partly crowdfunded through a Kickstarter campaign, which reached its goal

Revealed in the Microsoft E3 trailer

No relation to the mobile game We Happy Restaurant, though the mobile game seems to be (vaguely) inspired by this game, and both games featured mind control as a plot point, although handled differently.

open/close all folders
#-M
N-Z
They Came From Below
Lightbearer
We All Fall Down
People won't face facts. Not until we take their Joy. And when we do that...they'll murder each other in the street.