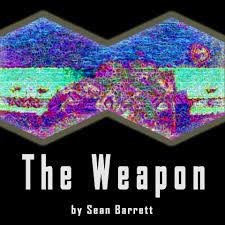 This is a chance to make history together, Tolan. So crack [The Yi-Lono-Mordel], but leave opening it all the way to me.”
-Cheryl Thadafel
Advertisement:

The Weapon is a Sci-Fi Interactive Misdirection game created by Sean Barrett in 2001.

A war has been going on between the Lono, a multi-galactic threat, and the Terran Alliance. The Lono were all pushed back into another galaxy, but not before promising vengeance. The now depleted forces of the Terran Alliance have turned to the Yi-Lono-Mordel, built by the Yi, a race believed to have been destroyed by the Lono long ago before they could use it. A dig team leader named Cheryl has called a Mechanist named Tolan to find out what exactly it does and if it can be used effectively in the war. However, Tolan has different ideas of what to do with the weapon from Cheryl.

This game was nominated for Best Individual NPC and Best Puzzles for the 2001 XYZZY Awards, but won neither.