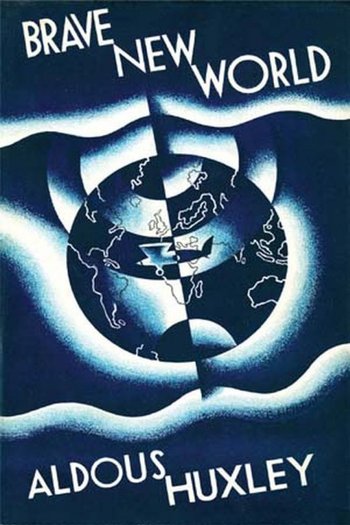 A 1932 dystopian novel written by Aldous Huxley. Quite possibly the only serious Western Dystopia involving too much happiness... as provided by the totalitarian state.

In the future, most of humanity and the environment people live in has been tailored to make everyone happy. There are five castes of people (Alphas through Epsilons), divided further into sub-castes ranging from the leader Alpha Pluses down through the barely-human grunt Epsilon-Minus Semi-Morons. Everyone is grown in jars and their general roles in society planned before "birth". The population is pacified with virtual reality, needlessly complex sports, crowd activities, and the pleasure drug soma. Human needs are satisfied—by biological engineering when necessary; orgies are the norm; and anything that might possibly cause dissatisfaction is simply left out of society.

The cost of continuing to breed people smart enough to keep society running is the risk of emotional instability in those people. Genius creates the risk of madness—yes, in this society, unhappiness qualifies as madness. We have a Type Alpha who is not as tall and strong and beautiful as most, looking more like a Type Gamma; there are continual jokes about his jar getting spiked with alcohol. He fantasizes about being unhappy. And we have a Type Alpha who's in a critical position in society: he writes advertising jingles. Unfortunately, he suddenly wants to create True Art, and True Art Is Angsty. (No, he doesn't actually create True Art. Wanting to is bad enough.)

The only exception to all of this are the "Savage Reservations", barbaric and primal communities where people still live with nature and its cruelties and limitations, where people are born naturally and know the full range of emotions. After growing up on a New Mexico reservation, one of the novel's protagonists leaves for the wider world (along with bringing some Shakepeare with him), where he quickly becomes a celebrity but at the cost of his own sanity as his ideals and emotions clash horribly with that of the rest of society.

This novel is famous for quite a few things. For one, the biological techniques described in the book (such as cloning) would turn out to be remarkably similar to those used in the modern day, despite this novel being written in the 1920s, decades before real science would ever reach this stage. It helps that Huxley was a member of one of Britain's most important and productive scientific families

(his older brother Julian was a leading evolutionary biologist and his grandfather Thomas was Darwin's Bulldog, the man who argued Darwin's idea in public for him).

It's also a true example of Crapsaccharine World and Crapsack Only by Comparison, and one of the few true examples of a fully developed, internally consistent, Blue-and-Orange Morality. The Brave New World is a fully-functioning society where everyone is happy, youthful, healthy and productive, but it is presented as a dystopia because this comes at the cost of creativity, free will and progression. The Reservation is a free community of emotion, but it is also a dirty, disease-ridden tribal wasteland where the weak are ostracized and pain equals redemption. Aldous Huxley would later go on to express regret at not including a third option that would have been a happy medium of the two. (He does, in his later book Island, but not for the Savage.)

Huxley has often been accused (including by Kurt Vonnegut) of plagiarizing We in writing Brave New World. Despite the numerous similarities between the two books, Huxley always denied this, so compare and contrast the two.

Also, this book is frequently compared to 1984 — even by Huxley himself — as a way of showing the perspectives of the dystopia-esque society. Note that Nineteen Eighty-Four shows that what we fear controls us, while Brave New World shows that what we love controls us.note The most famous expression of this argument was in the introduction to media scholar Neil Postman's 1985 work Amusing Ourselves to Death

Also compare Fahrenheit 451, a later work with similar themes of an oppressive, pleasure-driven society, vacuous entertainment, suppression of emotions and the elimination of the past (i.e. books).

Also compare Equilibrium, which also uses many of the same themes of emotion control oppression by a World State that decides how people should feel.

And before you ask, the Iron Maiden song of the same name was inspired by the book. Not to be confused with the second expansion of the fifth installment of Civilization.

The book is now in the public domain, and can be found here.

A television adaptation has been released on NBC's streaming service Peacock on July 15, 2020. It has been adapted twice previously as made-for-TV movies in 1980 and 1998 (the latter notably starring Leonard Nimoy as Mustapha Mond).