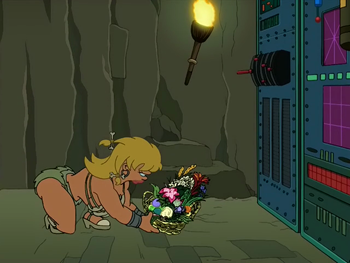 Our motherboard who art in native mode,
hallowed be thy circuits...
"From weakness of the mind, Omnissiah save us,
from the lies of the Antipath, circuit preserve us,
from the rage of the Beast, iron protect us,
from the temptations of the flesh, silica cleanse us,
from the ravages of time, anima shield us,
from this rotting cage of biomatter,
Machine god, set us free."
— The Prayer of the Adeptus Mechanicus, Warhammer 40,000
Advertisement:

Cybernetics Eat Your Soul, but for some, it sounds like a good trade. These characters admire the sleek lines and shining chrome of machinery and idolize the purity of purpose and cold logic of artificial intelligence. Compared with the frailties of mortal flesh and the frivolities of human emotions, robots and AIs can come across as superior beings — after all, they are effectively immortal, and certainly don't seem to war amongst each other as much as humans.

Compare with Cargo Cult, in which technology is worshiped as a means to an end, without understanding, and First Church of Mecha, for the specific worship of giant robots. See also The Singularity, a possible outcome if a whole society joins the Machine Cult, and Unwilling Roboticisation, when the mechanization is forced upon people who refused it. When the AI is the one who decides it's a god, you have a case of Deus Est Machina. Can become very, very scary if combined with Cybernetics Eat Your Soul. Not to be confused with Robot Religion. The mechanical titan variant of Deity of Mortal Creation is subject to this by default.