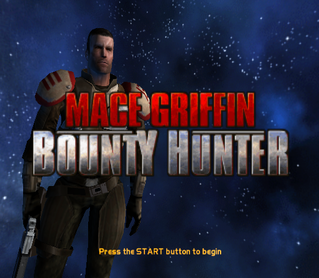 Mace Griffin is a sci-fi first-person shooter released in the the early 2000s.

400 years in the future, mankind has taken to the stars, colonized planets and made contact with alien life. The recent discovery of the Vagner system has attracted numerous corporations looking to mine its resources, turning the once empty system into a new frontier. The corporations formed the Enforcers to maintain order in the system, but they weren’t quite up to the task, so the High Senate formed the Rangers to keep the law and protect against the likes of pirates and smugglers. You play as Mace Griffin, who used to serve as a Ranger, until an assignment went wrong and his unit was wiped out. Being blamed for the debacle, Mace served ten years in prison. Now he’s become a bounty hunter, looking to wreak vengeance on the people who wronged him.