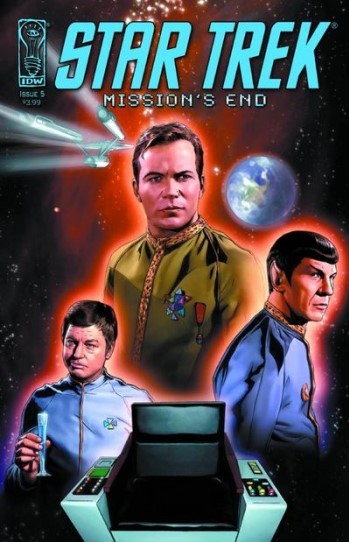 These have been the voyages...
Advertisement:

Star Trek: Mission's End is a Star Trek Expanded Universe comic miniseries, written by Ty Templeton and published by IDW Publishing in 2009. Taking place in the Star Trek: The Original Series timeline, it chronicles the final official mission of the U.S.S. Enterprise.

In the early days of the famous Five-Year-Mission, the crew of the Enterprise made First Contact with the inhabitants of the Planet Spaceship Archenar-IV, whose original crew had disappeared eons ago and since been replaced by the evolved descendants of the ships insect population. During the contact, Kirk and Spock discovered that not only were the life-support systems of Archenar-IV were still running, but the ship's engine is so powerful and advanced that if people of Archenar-IV, known as the Archernarians, figured out how to make it work they would be have the most powerful weapon in the galaxy.