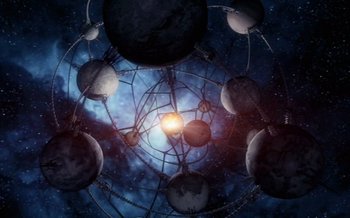 Seldom has 'starship' been so literal... or insufficient.
"...Brave as fools and bold as gods, they built an armada of swift little ships and raced out to meet me, and to my utter amazement, I discovered that I was enormous- bigger than worlds, massive and enduring, and in their spellbound eyes, beautiful."
— The Great Ship
Advertisement:

There's big spaceships, there's gigantic spaceships, and then there's these: a space ship (or station) that's as big as a small planet or large moon. In space, you have no external gravity to contend with, so it's possible to build some truly humongous structures like this. Alternatively, you may just want to strap some engines onto an actual planet or moon and set off, although this may require Sufficiently Advanced Technology. If the ship's big enough, it may even have its natural gravity be big enough to keep things rooted to its surface, though usually not enough to make an earth-like atmosphere (like, say, our moon).

Often used for Rule of Cool, in which case it will overlap with Cool Starship, the Planet Spaceship is a great way to intimidate your foe, or to pack your entire population off when your home world is in trouble. May evoke a "That's No Moon!" reaction when it first appears.

Technically, actual planets and moons are spacecraft in the sense that they are in orbit around something. Buckminster Fuller made this analogy when he referred to "Space Ship Earth." But to qualify for this trope, the super-colossal spacecraft must have some means of propulsion, or at the very least orbital correction.

Subtrope of Mile-Long Ship. May be used as a Big Dumb Object, The Battlestar, or a Generation Ship. Commonly, though not exclusively, found in Space Opera. Compare Dyson Sphere and Ring World Planet. See also: Unnecessarily Large Vessel, Unnecessarily Large Interior and Awesome, but Impractical.