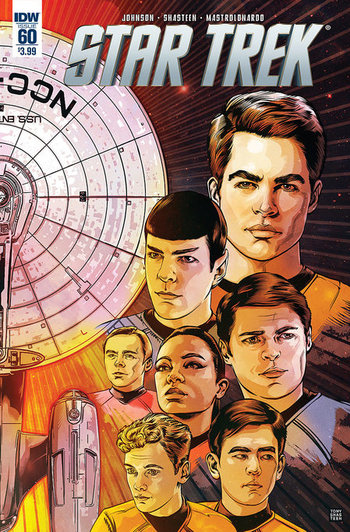 The continuing adventures of the Starship Enterprise.
Advertisement:

Star Trek, also known as Star Trek Ongoing was a comic series released by IDW Publishing, which follows the adventures of Captain James T. Kirk and the crew of the Starship Enterprise in the Alternate Universe launched in the 2009 reboot. It is part of the Star Trek Expanded Universe.

IDW's involvement with the reboot franchise began with a pair of miniseries — Star Trek Countdown, a prequel story that bridges the continuity between Star Trek: The Next Generation and the prequel universe, and an official adaptation of the 2009 film itself. The ongoing series began in 2010 with several adaptations of classic stories from Star Trek: The Original Series, before bridging into original storylines and character-centric arcs.

The series includes the following volumes:

Following this, the series was revamped as Star Trek: Boldly Go:

As many of the issues are adaptations of existing Star Trek: The Original Series episodes, expect many tropes from that series to apply here.