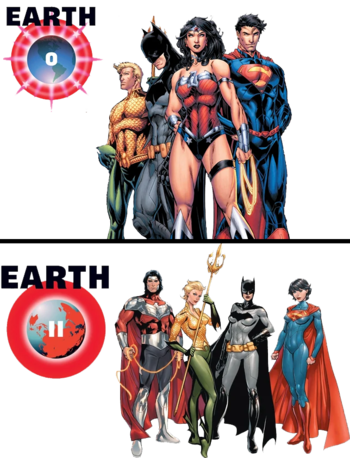 This is an alternative universe where almost everything is the same except that almost everyone is the opposite gender from the original universe. Heck, your dog might even be a cat in this universe! Normally in a stock TV show episode, the main character gets stuck in this universe or vice versa. This is a very popular stock alternative universe for fanfics and fan art.
Advertisement:

A common storyline for this type of universe is to portray society as a matriarchy with men being considered the weaker sex, allowing writers to point out certain double standards in how men and women are treated. Of course this inevitably results in more double standards and writers tend to write the gender swapped versions of characters differently to how the normal versions are written.

Sub-Trope of Distaff Counterpart and Bizarro Universe, where it's just the sexes of characters that are changed. See also Rule 63, which would only apply when this trope occurs in fanworks.

Not a Gender Bender sub-trope, as it's not an effect of sex-switching on a single person. This is a whole separate universe, full of Distaff Counterpart.