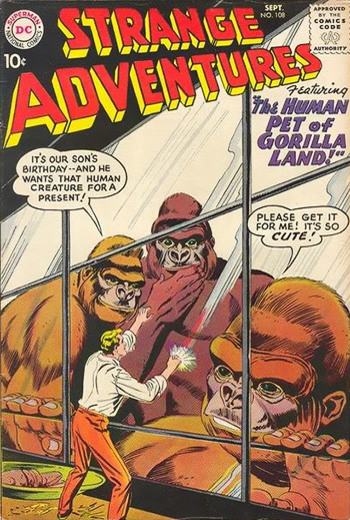 "I wish outer-space guys would conquer Earth and make people their pets, because I'd like to have one of those little basket-beds with my name on it."
— Jack Handey, Deep Thoughts
Advertisement:

So the aliens have taken over the world. Or maybe they've captured us and taken us back to their home planet. Either way, they decide we're cute and cuddly and they're going to take us home and keep us. This can also apply with earthbound supernatural races like vampires or demons as well. The main component of the trope is that it's a work where humans are the pets of another species.

Overlaps with Sapient Pet and This Is My Human. May overlap with Bond Creature or People Zoo. Especially common when humans are a Formerly Sapient Species.

Not to be confused with the webseries The Human Pet.