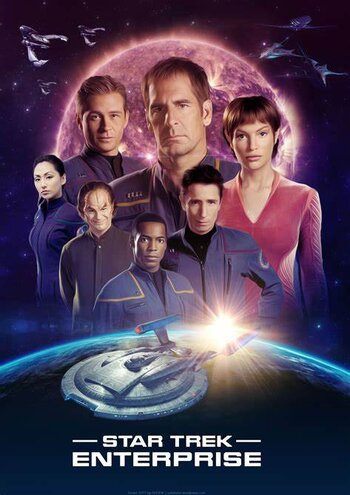 Welcome aboard the Enterprise NX-01.note From left to right: Malcolm Reed, T'Pol, Travis Mayweather, Jonathan Archer, Hoshi Sato, Trip Tucker, and Dr. Phlox.
"On this site, a powerful engine will be built. An engine that will someday help us to travel a hundred times faster than we can today. Imagine it — thousands of inhabited planets at our fingertips... and we'll be able to explore those strange new worlds, and seek out new life and new civilizations. This engine will let us go boldly... where no man has gone before."
— Zefram Cochrane, from a video recording shown in the pilot
Advertisement:

It's been a long road, getting from there to here...

Star Trek: Enterprise is the fourth Spin-Off of the long-running Star Trek franchise. It ran from 2001 to 2005.

ENT is a prequel series set in the 22nd century, around 100 years before Star Trek: The Original Series—though in practice, it worked better as a semi-sequel to Star Trek: First Contact, as hinted by the early appearances of James Cromwell and Next Generation aliens like the Nausicaans, Borg and Ferengi. Nearly one hundred years after Dr. Cochrane's historic warp flight, Captain Jonathan Archer is put in command of the Enterprise (NX-01), a cutting-edge warp 5 starship. The key selling point of this series was that space travel was not as casual as it became later in the chronology; most ships hadn't even left Earth's solar system. Unlike the previous Trek series, these crewmembers were also prone to swear and walk around in their underwear. The series only lasted four seasons, making it the shortest-lived Star Trek since The Animated Series, and the shortest-lived live-action series in the franchise other than the original.

The Enterprise is the first ship designed for exploration, and thus the first to visit many worlds in Seasons 1 and 2. The Temporal Cold War arc was also introduced during this time, tying back into the "Department of Temporal Investigations" introduced in previous Star Treks: Factions in the future were using time travel to rig history in their favour. This plot was forced on the writers by the network—presumably so as to avoid the lack of suspense expected from a prequel series. Still, even the showrunners didn't care for it, so it unfortunately just pops up from time to time before being terminated the moment the executives lost interest.

During season two, there was a sharp decline in viewership which led to a retool in season three: An alien race called the Xindi attacked Earth under the guidance of a rogue element from the Temporal Cold War arc. Enterprise was refitted into a heavy-duty battleship and sent into a chaotic region of space called the Expanse to enter negotiations or, failing that, to stop further attacks against Earth. This season dealt with the moral compromises the crew had to make, as well as coming to terms with the post-September 11th realities of network television.

At the start of Season 4, most of the writing staff was replaced and a new head writer, Manny Coto, was put in charge. This resulted in significant changes. Instead of a season-long arc, most stories were spread over 2 or 3 episodes at a time. Standalone stories were dropped, more or less entirely. This season dealt with the fallout of the Xindi attack, with many humans becoming violently xenophobic, and a brewing war with the as-yet-unseen Romulan Star Empire (which is a well-established part of Trek canon). But the most popular arc dealt with social reform on Vulcan—a piercing look into their culture, the likes of which hadn't been done since The Original Series.

Sadly, Paramount had no serious intention of renewing the series after Season Four. The cancellation ended 18 straight years of Star Trek production, and the series lay fallow before returning with an Alternate Timeline on film (Star Trek in 2009) and the original timeline on television (Star Trek: Discovery in 2017 and Star Trek: Picard in 2020). What's interesting is that Enterprise is the only series that is canon to both branches of the franchise, and thus is the subject of a number of Continuity Nods. The writers had been batting around ideas for where things would have gone in Season Five, some of which are realized in the novel continuation: Star Trek: Enterprise Relaunch.

Vote for your favourite episodes here.

From the earliest sailors crossing the oceans, to the Wright Brothers testing out their airplane concept in Kitty Hawk, to Neil Armstrong being the first man to walk on the Moon, to Zefram Cochrane inventing the first Warp Drive and making First Contact with the Vulcans: The Opening to Star Trek Enterprise embodies the nature of the Human Spirit to go out and explore what is beyond that next horizon.

Or in laymans' terms: "To Boldly Go Where No One Has Gone Before."

From the earliest sailors crossing the oceans, to the Wright Brothers testing out their airplane concept in Kitty Hawk, to Neil Armstrong being the first man to walk on the Moon, to Zefram Cochrane inventing the first Warp Drive and making First Contact with the Vulcans: The Opening to Star Trek Enterprise embodies the nature of the Human Spirit to go out and explore what is beyond that next horizon.

Or in laymans' terms: "To Boldly Go Where No One Has Gone Before."