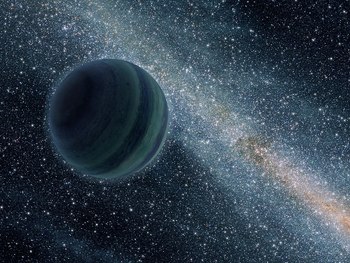 If planets were sentient, then this one would Go Mad from the Isolation.
Advertisement:

"Planet" is a term whose etymology originates from the Greek word for "wanderer" — and while most planets in fiction can be found "wandering" in orbits around a star (or multiple stars), this one truly is wandering — completely alone.

It wanders across the universe silently, without the light of a sun to provide heat. For obvious reasons these planets tend to be Single Biome Planets of the frozen and dark varieties, although if they're covered in a thick ice sheet, life might flourish in liquid oceans heated by the planet's core — a moon orbiting one of these planets might also get enough energy from tidal forces to have a liquid interior.

If the planet was not always a lone wanderer, ruins of civilization might be found on it — dry cold is one of the best means of preservation we know of today, and ruins will thus be preserved for a very long time. Typically, the fact that the planet was flung away doesn't bode well for the civilization once found on it, though examples do exist where the original inhabitants managed to perform a Homeworld Evacuation.

If one of these is deliberately built by a civilization, usually a Higher-Tech Species, possibly because their original sun was killed, or died and they wanted to Outrun the Fireball, it's a Planet Spaceship. See also Big Dumb Object, which may be mistaken for one of these at first glance. If the planet moved itself out of orbit, you might be dealing with a Genius Loci.